Design, cut, engrave, weld, polish, sculpt, paste, paint, dye, spin—then repeat. This is how the artisans of San Miguel de Allende create the magic that is the body and soul of our city.

According to the National Institute of Geography and Statistics, there are some 300 artisans behind the city’s doors, and the Office of Economic Development reports that some 120 artisan workshops are registered in San Miguel, each with an average of four workers.

To help preserve handmade crafts and bring the artisans who create them closer to their buyers by eliminating the middleman, an “Artisan Corridor” was announced earlier in the year for San Miguel—one of several dozen such corridors across Mexico. The one in San Miguel is made up of eight workshops, specializing mostly in metalwork, wool, and papier-mâché. Unfortunately, just as the corridor was preparing to open, everything came to a halt due to the pandemic, but now—seven months later—the artisans are once again working, enthused, and open to locals and visitors alike. Here are some of their stories.

You might think that the life of a craftsman is exciting, but this is not so, because those who benefit most from selling handmade crafts are not the artisans themselves, but rather the intermediary middlemen. Ubaldo Deanda knows this all too well. By participating in the Corridor program, Deanda is positioned to remove the middleman and achieve a greater return on the work he puts into his craft. A poet, doctor, engineer, architect, and owner of one of the largest and most successful metalwork workshops in San Miguel, he had 250 employees who watched his business grow with him. But then came the world health crisis, which took a large bite out of his business. There are candlesticks, candelabras, stars, lamps, mirrors, and hearts in Deanda’s workshop. They are all unique pieces, made by hand with tools that date back to 1976, when he and his brother—who was studying architecture—decided to start the workshop.

Deanda says that in San Miguel, it is difficult to think about crafts without evoking Fulgencio Llamas, one of the most renowned artisan, a man who once sold milk. If one of his metal milk containers had a hole, he had no choice but to wait for a Mexico City welder to come repair it. But after watching the welder work, he decided to take matters into his own hands and bought his own welding tools. This started him on a new career path, and, later, when his children grew up and emigrated, one gained experience working with copper, tin, and brass. After returning to San Miguel, his brass expertise was the beginning of a family business producing the renowned chandeliers, mirrors, stars, and other classic brass products of San Miguel. The Llamas family began manufacturing their handicrafts in the mid-1930s, and by 1945—with the arrival of tourists—their products were already known worldwide.

Deanda welcomes those who visit his workshop. It’s an establishment where large art pieces and mirrors adorn the walls. He tells his visitors about the processes involved with producing each piece, and his enthusiasm conveys the large part of himself that goes into his work. If there is time, he tells the story of how his start in the world of craftsmanship began in 1968 with him creating jewelry—and how he began his workshop 10 years later. This “proved to be a success; then failure; then rise again,” he said. Such were the ups and downs of the business. Almost 50 years later, he still has his workshop, with four brass masters, located on Volanteros 1A. 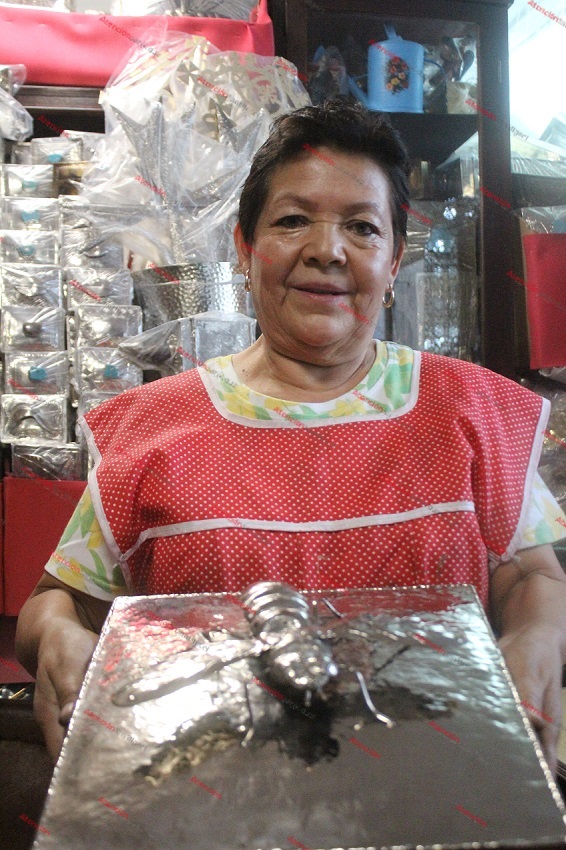 Queen of silver and nickel

Ruth Cortés does not remember—or does not want to say—the name of the foreigner with whom she began working at age 20. Cortés was given silver, which she weighed and then distributed among the artisans who worked it, after which she then checked the quality of the resulting pieces. She did not concern herself about the legality of the business—this responsibility fell on her employer, who eventually had to leave the country. The new owners took over the tools and hired her to continue producing shells for belts and silver jewelry. After three years—36 years ago—Cortés acquired the shop and continued making artisan crafts, making her creations first with silver and later moving to nickel. She now works in silver only by request. In her workshop at Colegio Militar 26 A in Colonia Guadalupe, she employs 10 people, who create pieces ranging from a dragonfly to a simple bracelet. In her workshop you will find piñatas, ashtrays, cutlery, crowns, salad bowls, napkin holders, funerary urns for both human and pet ashes, decorated ox horns, hearts, mirrors, and crosses. 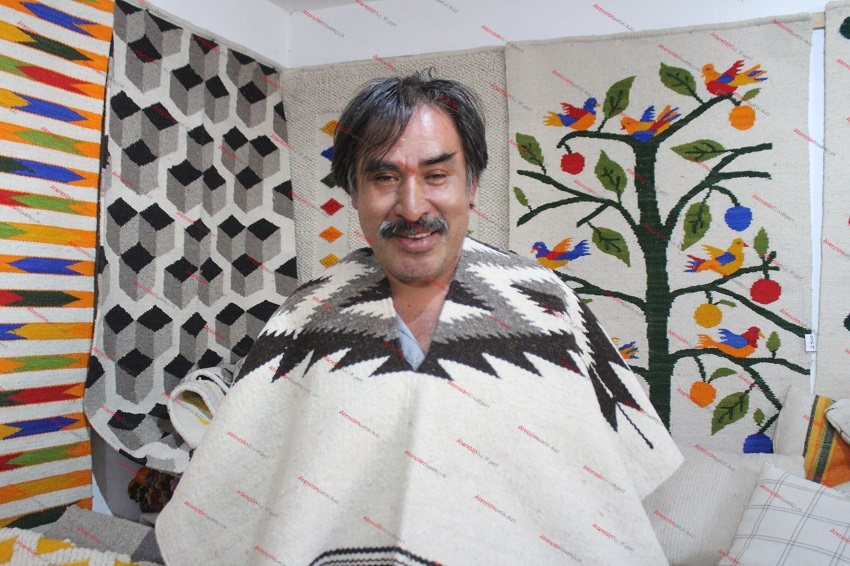 Between wood, thread, and wool

Some say there are 12 wool workshops today in San Miguel; artisan Martín Luna knows that there are only four, and in these, workers go to the highest bidder. Wool products such as rugs, bedspreads, pillowcases, and overcoats have been produced in large quantities in the city since the 18th century, after which looms began to gradually disappear, although they are easy to make. Luna has been working with looms since he was 20 and now has four looms at home, one of which is some seven meters long.

“I worked for two years at La Madeja, dyeing and preparing the fabric,” he said. “One day, the weavers went to watch a soccer match. The boss let them go, and the next day they did not return. In my spare time, I would go up to the looms. I already knew how to weave; he had a big order, so we got the job out.”

Years later he decided to become independent but did not know how to charge for his products or manage the business. “I did not lose; I did not win, but I learned,” he said, laughing. Now, he is one of the few loom workers in the city. In Luna’s showroom, you can see all the products he makes: bedspreads, overcoats, pillowcases, rugs, and other products. In addition, he does not hesitate to get on a loom to demonstrate and explain the weaving process. He will tell you that it requires good motor skills, as well as strong spatial and visual abilities. His workshop is in Colonia Mexiquito.

Pedro Hernández remembers an artisan named Valentine, a French woman with a paper mâché workshop, where she gave lessons. It was a time past, when paper mâché hot air balloons and clowns were popular. She inspired him, and when Hernández arrived in San Miguel from Michoacán in 1982, he made paper mâché fruits and vegetables, for which there was a large market both in the city and worldwide. When this fad passed, he had to revolutionize his papier-mâché. Through his sculpting, wallpapering, gluing, bleaching, and painting, he can create a skeleton or a Christmas ornament. His creations range from amorphous mermaids to giant skulls, death masks, roosters, hens, spheres, rattles, dolls, and gallery-quality pieces. His workshop has produced products shown at national fairs and showcased both in Mexico and around the world in countries including Germany, Japan, South America, and the United States. His daughter, Quetzal, has now also joined the family business. In his workshop, you can learn about the entire creative process of paper mâché art. Whenever he has an idea, he does not draw it; he does not talk about it; he simply molds it and makes it possible. That is why you will not find any sketches in his workshop. 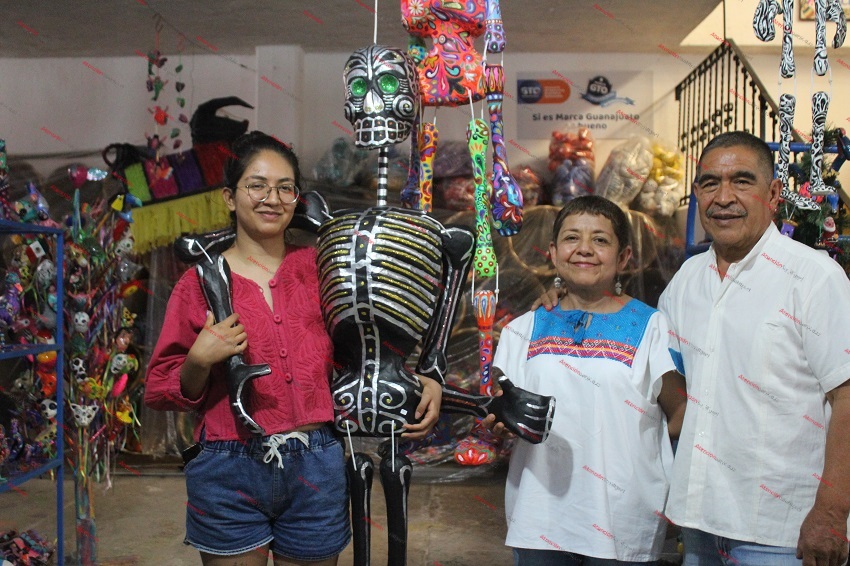 Non-governmental organizations (NGOs) and the National Endowment for the Arts have created the first artisan tourist corridor in the state of Guanajuato—and it’s in San Miguel. Hoping to drive growth within this sector, both the federal government and the municipality have invested more than half a million pesos to improve the workshops, workspaces, bathrooms, and artisan displays. According to one of the officials invited to the inauguration of the San Miguel Artisan Corridor in February, the goal is to link the artisan workshops with San Miguel residents and the tourists who visit the city. With a slogan of “create with the heart, and build with your hands,” the initiative strives to convey an understanding and appreciation of traditional artisan production, along with the value and cultural context of the artisan pieces by watching and interacting with the artists. Among those present at the inauguration event were Verónica Agúndis, municipal trustee; Emma Yanes Rizo, director of FONART; Francisco Garay, director of Economic Development, International Relations, and NGOs; and Ubaldo de Anda Ramírez, president of the Artisan Corridor.

Thanks to Francisco Garay Russo, director of Economic Development, International Relations, and Relations with Non-Governmental Organizations, and Sandra (Sandy) Galván, chief of the office of artisans matters, for their support in making this article possible.