Galileo di Vincenzo Bonaiuti de’ Galilei (1564-1642) has been called the father of many things: of “observational astronomy,” of “modern physics,” of the “scientific method,” and of “modern science.” (Wikipedia)

Born in Pisa, the future polymath became an accomplished lutenist like his father Vincenzo and acquired his skepticism for established authority early on. Galileo enrolled at the University of Pisa in 1580 to pursue a medical degree at his father’s urging. After accidentally attending a lecture on geometry, he persuaded his family to let him study mathematics and natural philosophy instead.

Galileo’s championing of Heliocentrism and Copernicanism met with opposition from within the Catholic church. Heliocentrism is the astronomical model in which the Earth and planets revolve around the Sun at the center of the Solar System as opposed to Geocentrism, which places the Earth at the center. The proposition that the Sun is the center had been considered as early as the third century B.C. but was not presented as a mathematical model until the sixteenth century by mathematician and astronomer Nicolaus Copernicus, leading to the Copernican Revolution. A century later, Johannes Kepler introduced elliptical orbits. Galileo added supporting observations, making use of his innovative telescope.

He later defended his views in “Dialogue Concerning the Two Chief World Systems” (1632), which appeared to attack Pope Urban VIII and the Jesuits, supporters of Galileo up to that point. Galileo was tried by the Inquisition, found “vehemently suspect of heresy,” and forced to recant, spending the rest of his life under house arrest.

Galileo was one of the first modern thinkers to clearly state that the laws of nature are mathematical. His work accelerated the eventual separation of science from philosophy and religion—a major step toward inductive reasoning.

A product of Italian and American influences, this hearty soup is the perfect antidote for blustery weather!

Heat oil in a large stock pot over medium heat. Add onion and celery. Cook until slightly softened, 3 to 4 minutes. Add garlic and thyme. Cook until fragrant, about 1 minute. Season with chili flakes, salt, and pepper. Add butter, stirring until melted. Fold in flour, cooking until no longer raw, 2 to 3 minutes. Add broth and chicken, bringing up to a simmer. Add noodles and cook until chicken is tender, and noodles are cooked through, 12 to 14 minutes. Remove chicken and shred, then return to pot. Add heavy cream, mozzarella, and Parmesan, stirring until incorporated. Add spinach, stirring until wilted. Serve topped with more Parmesan, extra red pepper flakes and parsley! 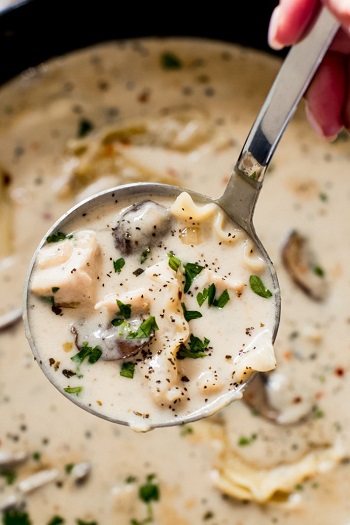 There is no consensus surrounding the origin of the Dada movement’s name. The term anti-art, a precursor to Dada, was coined about 1913 by experimental painter and sculptor Marcel Duchamp to denote works that challenged accepted definitions of art and aesthetics.

Street food in Thailand originated with the country’s ethnic Chinese population. Here are two delicious recipes that epitomize Thai urban fare and complement each other beautifully!

Mexican cuisine at its finest reflects the passionate and indomitable spirit of its people with unforgettable combinations of flavors, exotic presentations, and refined food aesthetics. Try these superb “lunch bowls,” robust combinations of ripe tomatoes, black beans, sweet potato, silky avocado, smoky chorizo, cheese, and eggs—as you like them!