There is no consensus surrounding the origin of the Dada movement’s name. The term anti-art, a precursor to Dada, was coined about 1913 by experimental painter and sculptor Marcel Duchamp to denote works that challenged accepted definitions of art and aesthetics.

In his quest for spontaneous, elemental art, Jean Arp (1886-1966) created collages and wood reliefs while experimenting with automatic writing. His wood reliefs are known for their sensuous tactile qualities. Pieces such as “Leaves and Navels,” created in 1930, were painted in cool off-whites, their shadows alone separating them from their monochromatic wood supports. The title is evoked with small circular forms alternated with leaf-like objects and arranged in no particular order, conjuring the natural fluttering of leaves in the wind and randomness of drops of rain falling on glass.

After studying in New York, innovative photographer Man Ray (1890-1976) founded a Dadaist group there and became a leading figure of the Modern Movement. He relocated to Paris during the 1920s, where he pioneered new techniques in photography and created several Surrealist films. Solarized images and rayographs—photographic images made without a camera were his inventions and legacy.

His 1932 black-and-white rendering of a female nude “Tomorrow” is displayed on a curved surface and makes use of triple exposure to suggest sexual tension, dramatically emphasizing the female form. Man Ray’s deliberately “irrational” methodology was perfectly compatible with the Dadaist objectives to shock and outrage, undermining the old-line concerns of the French bourgeoisie.

Italy and France have given us major art movements such as Modernism, Cubism, and Futurism. The two countries guided the evolution of post-Renaissance culinary arts, as well, adding ingredients such as Dijon mustard and Balsamic vinegar to the cooking vocabulary of the West. Balsamic vinegar is a dark, intensely flavored ingredient originating in Italy, celebrated in fine European and American restaurants and kitchens. Here is a delicious, simple dish that intensifies the flavors of chicken, balsamic, vegetables, Dijon mustard, and fresh basil!

1 large zucchini, cut into half moons

In a large bowl, whisk together one quarter cup olive oil, plus the vinegar and mustard. Add chicken thighs and toss to coat. Cover and refrigerate for up to 4 hours. Preheat the oven to 425˚ F. In a large skillet over medium-high flame, heat remaining 2 tablespoons oil. Shake excess marinade from chicken. Season all over with salt and pepper. Add to skillet, skin-side down. Cook until seared and golden, about 6 minutes. Flip and sear the other side, another 6 minutes. Scatter tomatoes and zucchini around chicken. Season vegetables with salt and pepper, then transfer skillet to the oven. Bake until chicken is cooked through, about 30 minutes more. Garnish with Parmesan and basil just before serving. 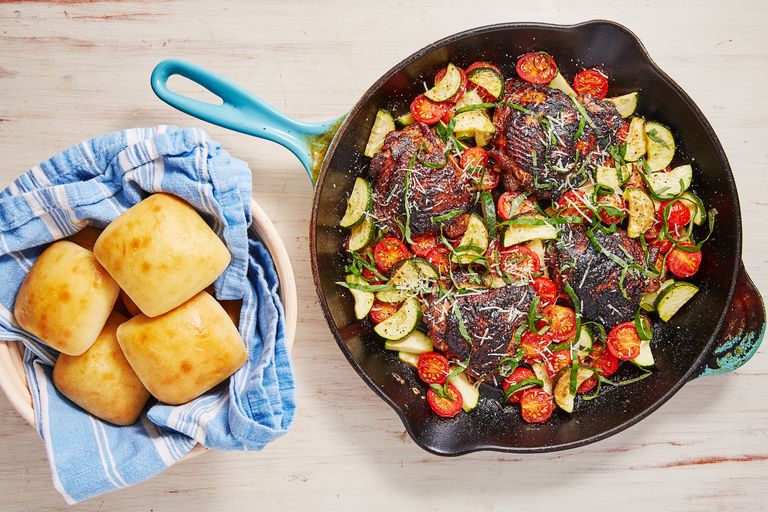