Traditionally, the night begins with a kermés—named after the red dye used for decorations and derived from an insect of the same name. The festival begins in the oldest neighborhoods of the city, where people meet, share a meal, sing, dance, and prepare for the big event. At around 3 a.m., carrying giant stars made of wood, adorned with colorful paper, and mounted on poles, they walk in processions to the Jardín. Then at 4 a.m., the local people and visitors gather to witness a spectacular explosion of thousands of fireworks as the Alborada (which means “dawn”) begins.

This year will be very different. Paulina Cadena, director of San Miguel’s Directorate of Culture and Traditions, told Atención that because of the pandemic, there will be no public festivities this year and none of the rituals that might attract hundreds or thousands of people, such as the entrance of the ánimas (souls), xúchiles offerings, regional dances, or mojigangas.

If the event takes place at all, it will be in much smaller groups, she said, though her office has developed time capsules showcasing San Miguel traditions that will be distributed through digital platforms and television channels to help bridge the gap this year.

In the 1920s, textile factory workers in Salvatierra and Villa Hidalgo (Michoacán) were transferred to Fábrica La Aurora in San Miguel. They worshipped the Virgen de la Luz (Virgin of Light) and began celebrating her at the Immaculate Conception (Las Monjas) church, transferring a festival they had celebrated in their villages for many years to San Miguel. Fireworks were added to this celebration on December 8, 1924.

The wind instruments, giant stars, fireworks, and joy with which the crowds celebrated the Virgin caught the attention of the parish priest at the Parroquia, Refugio Solís, and he invited the devotees to continue the festival, but at the Parroquia. According to Emigdio Ledesma, one of the most deeply-rooted traditionalists in the city, the celebrations at Parroquia began on September 29, 1925. They have grown tremendously in size over the years—and have also changed.

Now, in a typical year, hundreds of people gather on the night of La Alborada at Fabrica La Aurora, Valle del Maiz, and La Estación (the train station). This year, La Alborada would have occurred on October 3. From these locations, they travel in three separate processions to the Jardín, carrying stars, dancing, singing, (and drinking). The three contingents eventually meet at the corner of Canal, Plaza Principal, and Hidalgo. After going around the Jardín three times, the groups converge, and the hour-long fireworks show begins.

However, according to some, the party has turned into excessive alcohol consumption, noise, and yelling of profanities.

Ledesma said that he feigned knee pains last year to avoid participating in the parade, and he felt pangs of nostalgia for the procession. But Ledesma believes that the parade and the all-night party that precedes it “is a river of alcohol and shouts of expletives.” He claims that when last year the few security officers tried to control the crowd, they found that they could not and had no choice but to withdraw. “We are in a stage of reflection; we are alive; we must see what we will lose if La Alborada is not controlled,” said Ledesma.

Gloria Rodríguez, local traditionalist and teacher, is thankful that because La Alborada takes place at dawn, it is not common to have children or older adults in attendance. She decided several years ago to recreate the party on the Friday of the previous week so more people could participate in the festivities. “The first time we did it, there was very little participation,” she said. “We thought it would be the first—and last—such party.” However, after 20 years, the “Alborada Review” has become an emblematic “prior-to-the-party” event. Of course, this year it will not be taking place, and the Association represented by Rodriguez has requested that the fireworks that would have been used be distributed each neighborhood churches neighborhoods so everyone can enjoy the festivities, even if on a minor scale, and is awaiting a response from the Directorate of Culture and Traditions. 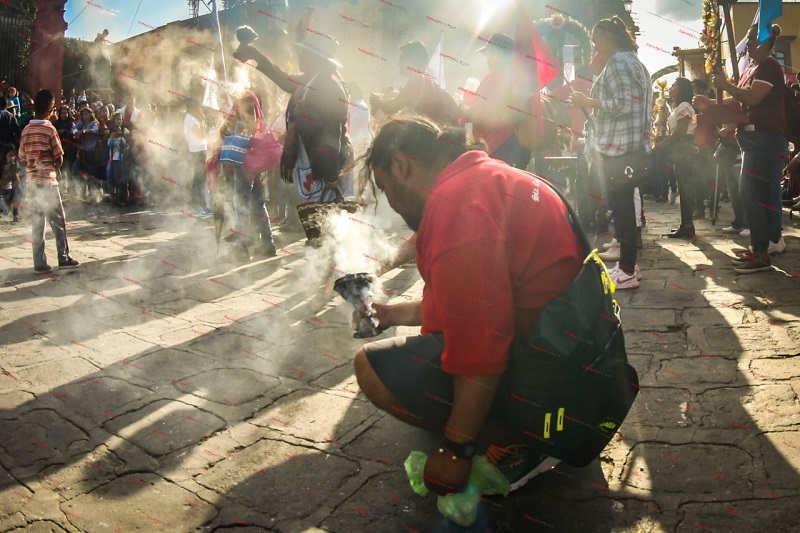 Yes, there will be Xúchiles

Most years, some 40 local, regional, and national dance groups gather on Calzada de la Estación on the day of the festival. There they meet up with descendants of San Miguel’s founders, whose spirits are represented by the crosses carried by their progeny, who guide the procession. Among the dancers are men carrying heavy structures made of parallel pine poles, adorned with cucharillas (guapilla leaf), marigolds, and giant leaves. They will walk towards the Parroquia, where these xùchil creations are placed in front of the church. The xùchil offerings are created the night before the procession by traditionalists who meet in a designated place and begin to work, offering praises and prayers. In ancient Mexico, xùchiles were used to carry warriors who fell in battle and then erected as headstones on their graves once the warriors were buried.

Valle del Maíz is one of the neighborhoods responsible for developing one such structure.

Agustín González, mayordomo (official in charge) of the Valle festivities, told Atención that, yes, there will be xùchiles this year. A meeting with Culture and Traditions has already taken place, he said, and there is an agreement that these will be placed during the days that La Alborada would typically be taking place.

Ledesma noted that he is concerned that the Directorate of Culture and Traditions and the parish priests will authorize the placement some stars (stars made of paper that are part of the symbols used during the festivity) in the atrium of the Parroquia, and he acknowledges that “there is a party, but we must stay home.” They are still working to prepare a small contingent of up to two stars and about fifteen minutes of fireworks, he noted, but this has not been confirmed.

The exact plans and schedules will be revealed closer to October to avoid unnecessary mass meetings. Consult the October 1 edition of Qué Pasa for an update.