With the rains this year the overflowing Atascadero arroyo carried off bricks, large cans, gravel, sand, shoes, bottles, and even a car in 2019. All this happened just before workers were about to place a grate to prepare for laying a solid walkway in the Atascadero Area. Due to the rain the work had to be put off for several days. The workers received a scolding.

We spoke with neighbors who told us that they are happy that work is being done on the Atascadero arroyo. However, they complained that SAPASMA (Sistema de Agua Potable y Alcantarillado—Potable Waters and Sewage) never let them know about the work.

“The work is not for proles like us,” a resident on Aparicio Street with a door on the arroyo side said, laughing, “it is to fix the disaster they created when approving ‘Tlatelolco,’ (as the neighbors call Capilla de Piedra) so that the runoff will have somewhere to go.”

“We don’t know if we’ll be able to open our doors on that side of the arroyo,” said a resident on Homobono Street. Other residents appeared disinterested in the project. 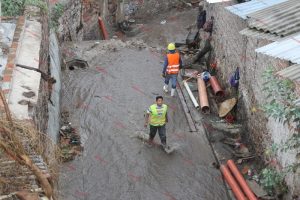 Over the years, arroyos have gradually been covered over. One reason was that since arroyos ran behind many houses, residents discharged their sewage into it.

We spoke to staff at SAPASMA. They explained that an underground channel carries the contents of the Atascadero arroyo to Avenida Guadalupe, where it then flows into the Cachinche Arroyo (along Obraje). It has electric lighting and air tubes that lead to the exterior. “You feel like you’re in an underground tunnel, like in Guanajuato,” said an official.

Francisco Jiménez Palacios, director of SAPASMA, said that when the project is completed, there will be a tour of that passage up to where it discharges into the Cachinches.

On July 1, 2019, an early morning hailstorm caused havoc. Marcos Esquivel, coordinator of Atmospheric Sciences at the University of Guanajuato, explained that during the change of seasons “there are extreme [weather] phenomena; strong winds cause cooling in the lower layers, causing hail to fall.” He could not rule out that the phenomenon would not be repeated because of the high altitude of the city—1900 meters above sea level.

On that day, the hail and rain produced icy water that caused flooding, with layers of ice up to 50 centimeters deep. The flood carried off a large-scale photo exhibit on Calle San Francisco almost to the Guanajuato bridge. Even a compact car disappeared in the flood. Reported as stolen, it was spotted days later in the arroyo by residents on Homobono Street. Apparently carried off by the flood, it broke through a portal and got stuck in a concrete girder. Removing it was problematic, and wasn’t achieved until June 2020. “The owner sold it for scrap iron,” said a workman. The hailstorm even carried off cobblestones on Calle Aparicio. City employees worked for a month to restore the area. But the arroyo was not addressed until this year.

Projects to benefit everyone

Director Palacios said the works in the area (Aparicio-Núñez) will be completed in approximately one month, following an investment of 2.1 million pesos. The grand total for the project, from Aparicio up to Guadalupe Avenue, is 10 million pesos.

“The work we are doing,” he said, “is part of cleaning up the arroyo. The work is the same as on the section from Aparicio to Homobono, Andador Lucas Balderas and from Portón (at the bottom of Calle Hidalgo) to Avenida Guadalupe. It is for sanitation purposes. We want the area to look dignified (there was undergrowth, rubbish). There have been improvements.”

The director indicated that “12-inch collectors strainers were placed on both sides of the stream to catch the discharges. Our responsibility is to clean up. We want it to be top notch. If possible to give it another use,” possibly as a walkway, though he stated that this is not SAPASMA’s purvey.

Some neighbors are concerned about whether, with the works in the arroyo they will be able to open their doors on that side. Some outsiders have taken advantage of the situation and have gone into the area. They have opened doors to homes without permission. A resident told us, “Around here, even when the mesh and weeds were there, people were already walking by.”

Director Palacios reiterated that the project is for the benefit of all. “There is misinformation; what the organization is trying to do is clean up the area. If anyone is going to benefit, it will be the community; it is not aimed at a specific sector. The neighbors will see the difference,” he said.

“It is better to ask for forgiveness than permission,” goes the saying. Neighbors say that they were not informed about the work that is being carried out. What is true is that SAPASMA made the determination to do the work, the majority of neighbors agreed, and they did it before asking for permission  from them.

“I congratulate you, but lower the noise level”

Atencion visited the work site on several occasions. On one of these tours, a worker told us that the rain had washed away bricks, gravel, and  sand.

The workers were working noisily, some walking through the muck in their waterproof boots. We came in on a truck that was bringing in material so we could take pictures and see the progress of the project.

Later that day heavy rain fell. As workers poured concrete in one of the sections of the stream, the current dragged the material away. It most likely ended up in the Allende Dam or in the Wastewater Treatment Plant.

When the rain stopped, I returned and took photos and a video from a rooftop. A worker’s helmet fell in the arroyo, and before he could retrieve it the current carried it away. Another worker lost a shoe. Another took advantage of the rushing stream to shovel water onto the wheels of a backhoe to clean off the mud. Sand that had been left for the mixer disappeared, as well as some gravel and even bricks. In the rainy season these are risks that contractors take, a worker said, there is danger to the workers or anyone who could be swept away.

When we visited the area after the rain there was a festive atmosphere. Perhaps the workers were nervous or disappointed or in despair. They were talking about soccer, and when the camera appeared they loudly sent greetings to the America soccer team. A woman appeared on her rooftop and demanded, “Who is your boss? Do you want me to call SAPASMA to report you? I congratulate you for your work; it is looking beautiful, but get the noise down now, this happens everyday. Behave. My mom is ninety years old and is anxious.” Another neighbor thought the woman was overreacting. 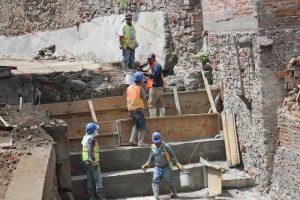