The National Electoral Institute (INE) is responsible for holding the popular referendum on August 1. It is meant to clarify decisions that political candidates have made, and to guarantee justice and the preservation of rights to possible victims. A debate has been opened on the subject, and federal officials, such as Deputy Ricardo Villarreal, claim that voting is participating in a farce. Why should there be a vote on whether the authorities responsible for guaranteeing justice do their job? These are the questions brought up by the political actors of the party in power.

The referendum is to punish former presidents of Mexico. However, the ballot already presented by the INE contains the following issues: Do you agree or not that the pertinent actions are carried out in accordance with the constitutional and legal framework, to undertake a process of clarification of the political decisions taken in the years passed by politicians, aimed at guaranteeing justice and the rights of potential victims?

The public is wise

“The people are wise, they know what is best for them,” Andrés Manuel López Obrador, president of Mexico, said in an interview after his election. He pointed out that citizens are less wrong than politicians, because they have accurate instincts. “Democracy is the power of the people. In a democracy, it is the people who rule, who decide,” he declared. For that reason, without having taken office, in October 2018 he said that the people would decide whether to continue the construction of the New Mexico City Airport. The question of that referendum was “Given the overcrowding of the Mexico City International Airport, which option do you think is best for the country? 1. Refurbish the current Mexico City and Toluca airports, and build two runways at the Santa Lucía Air Base. 2. Continue with the construction of the new airport in Texcoco and stop using the current Mexico City International Airport.” More information was provided on the back of the ballot. This referendum, according to Deputy Villarreal, was unconstitutional.

A million and a half pesos were spent on this, donated by MORENA party members and individuals. Fewer than one million, in fact one hundred thousand people participated in the referendum. Obrador was the winner, however, regarding stopping the construction of the New Mexico City Airport. The New Airport, according to the President, was involved in corruption. Up until 2018, 140 billion pesos had been invested, and by the end of the six-year period, in December of the same year, 200 billion more would have been invested.

The electorate of Mexico is made up of over 94 million voters. To make the referendum constitutional, there must be at least 40 percent participation, and a majority have to approve the question posed.

Atencion spoke with Itzel Peralta Perkins, executive member of INE District II—part of Celaya, San Miguel de Allende, Comonfort, and San José Iturbide. He explained that the process will be “similar” to an election for public officials, the difference being that there will be fewer voting boxes. “In the electoral process, a box is installed in each section. Here there will be Territorial Units (UT) made up of several sections. In each UT there will be two thousand ballots.

In District II, 194 tables will be installed. Each will have a secretary, president, and poll watcher. No political candidates will be present, although there may be observers. The referendum will take place from 8am to 6pm on Sunday, August 1, as established by the Federal Law of Popular Referendums. There will be no special boxes. To check where to vote, you can consult the UT list in the INE website, and Atencion San Miguel’s Facebook page. 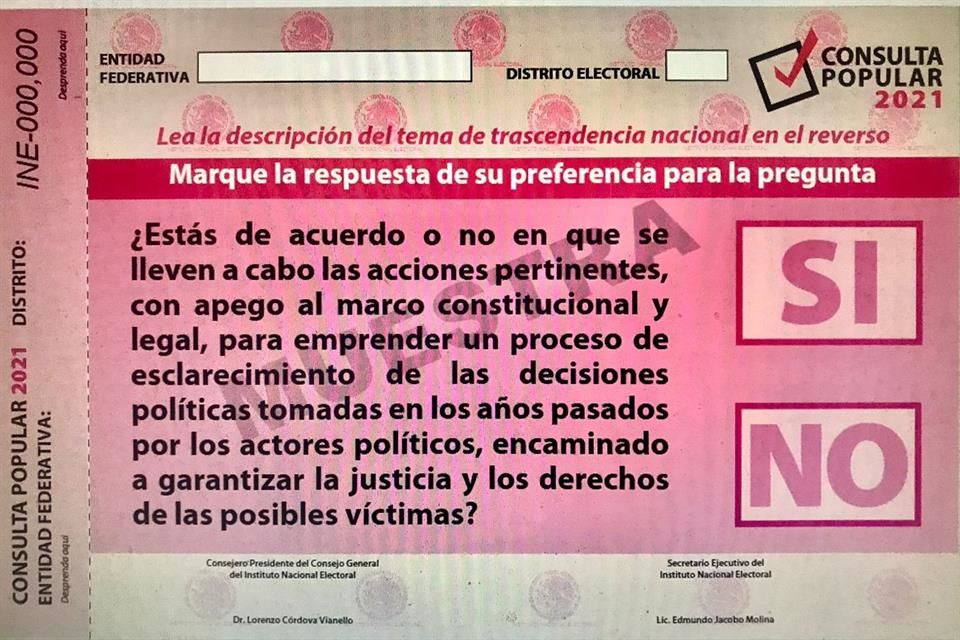 Atencion questioned federal deputy Ricardo Villarreal about his position on this referendum. He said that it is absurd to vote for the authorities to do their job.

“Although it is constitutional, it is absurd. The authorities have a constitutional mandate to investigate past events, especially if there were crimes or people’s lives were lost. In all cases of homicide, the prosecutor’s offices, by trade, have the obligation to investigate, punish, and offer reparation to the victims. The question is, do Mexicans want us to do what the law requires us to do? Yes of course. We want them to act as the law dictates, it is the constitutional mandate. What the president wants is an issue to divert attention from the real problems that the country has. The president says that the referendum is to know whether or not we want former presidents to be punished. That is not the question on the ballot. If a president commits a crime, he should be punished. If someone violated the law, he should be punished,” said Villarreal.

On the other hand, he criticized people like Emilio Lozoya who, although he caused PEMEX to fall further in debt, is not behind bars: “Emilio Lozoya is not in jail. Emilio Lozoya made PEMEX, a public company, go from $50 billion to $130 billion in debt. He turned PEMEX into a bankrupt company, it is the most debt in the world. He should be in jail, but no, he signed a pact with the president.”

Finally, regarding the specific question about voting or not, Villarreal launched an attack: “It is covering up a farce. There is no way that 40 percent of Mexicans, 36 million, will vote. It’s not going to happen. Most of the people who go will vote yes. But the result will not be binding because it will not meet the required 36 million. It is lying to Mexicans. The proof is in his [Obrador’s] illegal query about the airport. The president loves to play around, and this referendum will cost 521 million pesos that could be used to buy medicine. The president stopped the investigation, for example, of his brothers, who were recorded as receiving money from the campaign. That should be investigated by the Prosecutor’s Office. There is no point in participating [in the referendum]. There are debatable topics to ask the public, such as if marijuana should be legalized, and that it not be his party that decides; or if the public agrees it is valid to terminate a pregnancy,” he concluded.