Put the ground soil in sacks, transport, unpack, repeat. This was one of the initial challenges that Azucena Cárdenas and Rosana Álvarez, founders of Vía Orgánica faced in 2013, when they had to “pack their things, and start almost from scratch on the ground, in the natural [unadjusted] climate—the rainy season, the semi-desert.” This happened when the concept of “organic farming” was just beginning to take hold; when Mexicans—at least those of San Miguel de Allende—began to copy their northern neighbor’s healthy food model.

In 2009 there were already organic plots in the city, although they were private and the growers kept the knowledge to themselves. Fortuitously, though, activists who love spirituality, nature, local fair trade, and traditional food from the area—Rose Welch and Ronney Cummings (founders of Organization of Organic Consumers [OCA]), Rosana Álvarez, and Roger Jones—met. Their mission statement iterated their intention to establish a meeting point between peasant producers, merchants, and consumers; to shorten delivery time from farm to market and be the link between them. They opened Vía Orgánica, a restaurant and store in Colonia Guadalupe. It was recognized and patronized initially by foreigners, but—prior to closing —equal numbers of Mexicans and foreigners frequented the space.

With the experience and influence from OCA over the previous 15 years, Vía Orgánica started a parallel educational project in restaurant/hotel Nirvana. It has since trained thousands of locals and visitors how to organically grow food such as greens, vegetables, and fruit trees in backyard gardens. The challenge of the project “seemed interesting to us because the themes reminded us of our grandparents’ day, when there were no supermarkets, no transnational or transgenic influences, when they ate what they harvested—field food that was seasonal and without pesticides,” said Álvarez, president of Vía Orgánica.

It seemed that everything was in order: young people and adults were being educated in agriculture, and organic produce was selling and being purchased at Vía Orgánica. Furthermore, the first base group of organic producers in the area started to form, and the first organic tianguis (outdoor market) was promoted. Since then, direct links have been generated between producers and consumers.

In 2012 San Miguel de Allende’s first female mayor, Lucy Núñez, came into office. Convinced of the validity of the Vía Orgánica project, she gave permission for them to work in the Municipal Nursery. Unfortunately, Vía went from being in a place with ideal agro ecological conditions (Nirvana) to taking over a space that had become the municipality’s warehouse for materials and waste. Still, Vía restored the land, continued its classes, and taught women to produce food in their backyards. “At the end of the courses, we ate the vegetables that we had grown together in the nursery,” Cárdenas recalled. 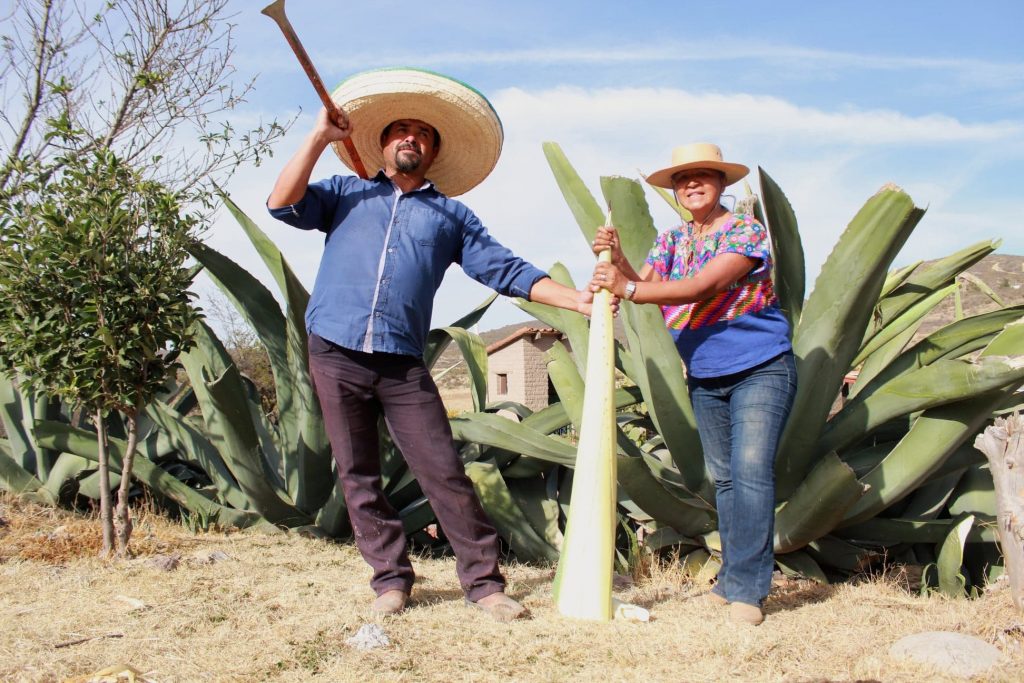 Although there was hope of continuing to work on the municipal land in 2013, the incoming administration asked for the space to be vacated to grow ornamental plants for the roundabouts. “We had to move in fewer than 30 days. We had already restored the ground. Initially we did not know where we would go. Then we acquired space in the Membrillo community. We came from a restored space to an area in a rural community with the ambient conditions of the semi-arid Jalpa Valley. We worked in the actual landscape, among the fields of many producers, facing the conditions of a producer. There was only water when it rained. It got more and more difficult.

The first part of the garden is there now, along with the shade house, restaurant, and shop. We designed the place. We did manual work. We started the educational space. It was built with ecological adobe. We started harvesting rainwater in underground cisterns for maintenance and food production,” said Cárdenas.

The Vía Orgánica ranch is developing and expanding little by little. Today, it has a workforce of 35 from the area (half of them women, half of them men). There are classes, workshops, and tourist tours that change according to the conditions and growth of the ranch.

Expansion during the contingency

The contingency has offered the project the opportunity of extra time to explore and rethink where they want to focus. Now, through social networks, more people in Mexico have become interested in their methods and workshops. Moreover, the organization is getting involved in raising sheep, goats, and pigs that will eventually be fed forage from maguey (agave) plants.

Cárdenas explained that part of the knowledge the founders share with the public is the impact of climate change and lack of rain that producers face. Vía Orgánica has joined the International Regeneration Project “One billion agaves,” a program that aims to plant magueys in Mexico and other parts of the world.

Juan Frías Hernández, a zootechnical agronomist engineer who has dedicated the last two years to developing information on the subject of agaves, explains that a maguey plantation is under way. It is not for distillates or alcoholic beverages, but for livestock feed. “One hectare in arid and semi-arid conditions with 2,000 agaves can give us, without irrigation or fertilization, about 1,000 tons of forage per year. At the end of its cycle, in about 10 years, the heart of the maguey can be harvested to generate syrup, honey, inulin, or forage.” Frías adds that in addition to being food for animals that produce meat and milk, the maguey captures the most CO2 and has the most soil retention of any plant in the world.

“To produce a kilo of corn, sorghum, or other plant forage, 1,000 liters of water are needed. To generate one kilo of maguey forage requires 60 liters. We need to produce food with less impact on the environment,” Frías concluded.

Álvarez, who has been in charge of expanding the maguey project in neighboring communities, intends for “landowners to learn from the model and apply it on their land during the contingency. This is what we want, for them to get closer to their land, for them not to give up; in the long run it is one of the answers to climate change, to the economy, to respecting native flora and fauna.”