VII. Right to live in proper welfare conditions and to have healthy integral development

VIII. Right of access to a life free of violence and to personal integrity

XII. Right to rest and recreation

XIII. Right to the freedom of ethical convictions, thought, conscience, religion and culture

XIV. Right to freedom of expression and access to information

XVI. Right of association and gathering

XVIII. Right to legal security and due process

At least 80 children and adolescents come to San Miguel de Allende every day to sell chewing gum, candy, and burro-shaped handicrafts, or to beg for money.

Currently, the System for the Protection of Boys, Girls, and Adolescents (SIPINA) is working not only to gather data and create awareness about respecting the rights of this sector of the population, but also on a pilot program to prevent and avoid child exploitation. The agency asks tourists and locals not to give money to these children, and thus be part of the solution that SIPINA has been working on.

The reports SIPINA has generated indicate that the sector of the population that comes to the city, mostly from Wednesday to Sunday to sell small items or beg for money, come mainly from the nearby communities of San Lucas, Don Francisco, El Pueblito, and Peña Blanca; some come from municipalities such as Comonfort, Salamanca, and even Celaya.

Juan José Bautista Garza, secretary of SIPINA, shared that SIPINA was reinstated in San Miguel in 2019, and now, because of its work and decentralization of the city council, it can be a model to follow throughout Guanajuato state. Garza also commented that SIPINA’s mandate should not be confused with that of the Attorney General’s Office—part of the National System for the Integral Development of Families (DIF)—because the work of SIPINA addresses promoting awareness so that people know and respect the rights of children. He said, “[the fact is that] sometimes neither adults nor children know their rights.”

According to Lourdes Morales, a counselor at SIPINA and children’s rights activist for 20 years, SIPINA is an organization that emerged with the objective of impacting public policy so that government projects determine the needs of children and that meeting those needs is included in the city budget.

Today SIPINA wants to impact policy making, which is why it has started a pilot program to stop the exploitation and trafficking of minors in San Miguel. At the beginning of February, SIPINA presented its program regarding these issues to members of its organization.

The program and material presented to its members is currently shared with all tourism service providers that work in the municipality so that they can proceed under the proper protocol, should they encounter possible situations of child trafficking and exploitation.

Regarding the project, Morales, who is also a teacher, said that training the general population on the subject is an objective—and hopes it will be included as an official Department of Public Education (SEP) school subject for students, at least in the municipality. For now, however, a controlled sample is required. She added, “Tourism is a consolidated group; we can train them. If they inform us about something irregular or something that can help us, we’ll know where help is needed. Implementation of the protocol begins in this sector, so they can know how and who to go to in order to help minors. This is a pilot project.”

Irene Fuentes, a teacher and counselor who has already implemented the program in other cities, confirmed that implementing the project in San Miguel came after a study of vendors and beggars carried out by SIPINA and the Municipal DIF, from August to December 2020.

“After the teams conducted the study, it was suggested that SIPINA solicit the support of other sectors, such as tourism. There is always someone in the tourism industry who might observe instances of child exploitation and can help reduce situations. What we are doing for detection or reporting is training and awareness workshops for tourism employees. It might seem acceptable to some for a father or mother to commit acts of child abuse because of their familial relationship, but the reality is that we must intervene and prevent these situations.

We develop a methodology, awareness, and training courses. Whoever receives information at a session can then internalize the information, become aware of problems, and develop empathy with the possible victim. We talk about statistics, related problems on a worldwide, national, and state scale, the action protocol, and address the questions of: What should be done? What is the right decision?” explained Morales.

On the other hand, Morales concluded “This is a preventive model. What good is reacting? San Miguel is not a city with this problem. We must anticipate it. When you have it, it is too late, [it means] you did not train people. We want a healthy tourist town, a healthy society.” 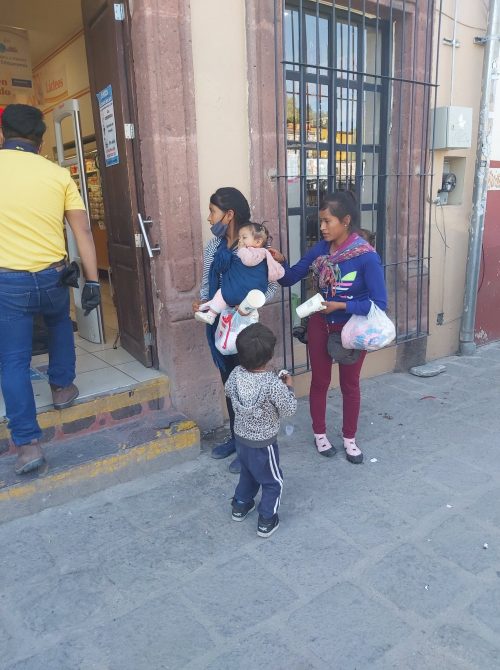 And the street children?

Morales said that the program “Your Coin Ties Me to the Street” will be implemented shortly on a permanent basis. If it is launched—not only in San Miguel but in other municipalities, such as Celaya—by promoting the services offered by different government agencies, the objective is sidetracked.

“Celaya has implemented the campaign. The problem is that they’ve lost direction. What they do is offer programs and government services. They do not prevent the problem. We must understand how to prevent the child from being on the street. We must attack the problem at its root, not bring the child a brochure. Who brings the children to town? With what intention? What are the living conditions in the place of origin? What is the living environment? We must review the conditions and seek a solution to guarantee the right to a life free of violence,” Morales concluded. To report children selling candy or handicrafts on the streets call 911.