Men in top hats and women in pretty dresses chatter and drink under the glowing lights of the Moulin de la Galette, a famous Parisian dance hall. Pierre August Renoir (1841–1919) loved to paint patterns of light and movement as figures moved to music or celebrated a slightly tipsy afternoon of food and the good life with a luncheon of pleasure boating.

The artist often recruited his friends as models. In his early career, Renoir spent a great deal of time sketching on the Seine river banks at Asnières, Argenteuil, and Chatou with his friend and fellow painter Claude Monet. During these creative sessions, the young visionaries honed their techniques, experimenting with bright colors and bold subjects, breaking with tradition. Renoir and Monet went on to join fellow students Sisley and Bazille and founded the Impressionist movement.

Subtle variations of grey form the base of the almost monochromatic winter scene depicted in the painting “Snow at Louveciennes” by Renoir’s colleague Alfred Sisley (1839–1899). Thick and distinctly applied impasto paint gives weight and depth to the snow as it accumulates and adheres to walls and trees. Sisley was deeply influenced by his friend Claude Monet. Together they strove to translate visual experiences into pure effects of luminosity.

Their experiments with color and light led to working in changeable atmospheric conditions. During the latter part of the nineteenth century, oil paint became available in tubes for the first time, leading to a flurry of innovative canvases by painters such as Van Gogh, who seized the opportunity to experiment on location in the open air. This founder of the Fauve style strapped canvases to his easel, anchoring them in the ground to withstand the famed mistral winds of his Provence.

The following recipe is offered in the true French spirit of joie-de-vivre!

Up to 12 cloves garlic, thinly sliced

Crusty bread and accompaniments for serving

Combine shrimp, oil, sugar, and salt in a medium bowl. Toss well to coat. Heat a large skillet on high flame. Add one tablespoon of the butter and swirl pan until butter melts. Add shrimp mixture. Cook, stirring occasionally until shrimp are almost done, 2 to 3 minutes. Remove shrimp from skillet with a slotted spoon. Add red pepper flakes and garlic. Cook, stirring often until golden brown, 5 minutes. Add sherry and vinegar, stirring and scraping to loosen brown bits, cooking until liquid reduces by half, about 2 minutes. Add remaining 2 tablespoons butter, stirring until it melts. Return shrimp to skillet; cook until heated through, about 1 minute. Stir in parsley, spooning it over the shrimp. Serve with crusty bread or grilled baguette slices and any of these suggested accompaniments: sugar snap peas, grilled corn, grilled artichoke hearts, olives, and/or almonds. 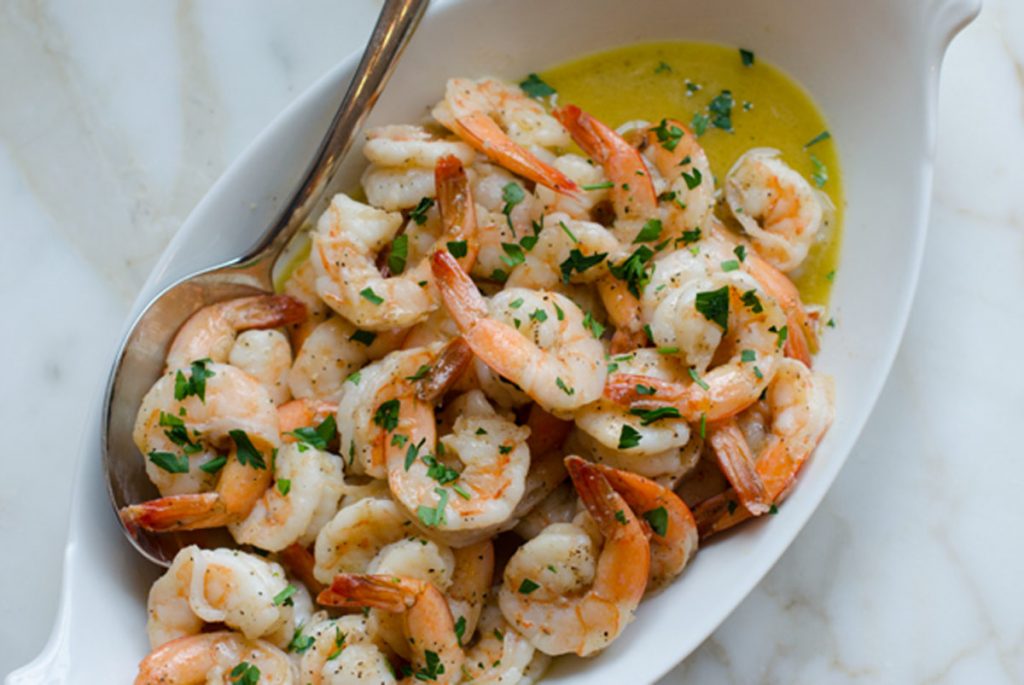 Previous PostPuppies!Next PostPreparing for Caring for Someone at Home with COVID-19