The Southeast Asian country of Malaysia lies just north of the equator and is composed of two noncontiguous regions: Peninsular Malaysia (Semenanjung Malaysia) on the Malay Peninsula and East Malaysia (Timur) on the island of Borneo. Most of Borneo’s Dayak peoples remain faithful to their animistic beliefs although they are likely to belong to one of six officially recognized religions: Islam, Protestantism, Roman Catholicism, Hinduism, Buddhism, and Confucianism.

Folk religions, characterized by a myriad of dialects, cultural patterns, and value systems, were prevalent among Malaysia’s indigenous peoples prior to the spread of Islam in the 15th century and the 19th century arrival of Christian missionaries from Europe.

Malaysian shamans (bomohs), also known as traditional healers, still practice their craft. Bomohs act as mediums, communicating with ancestral spirits. They have the power to cast spells, called jampi, to produce debilitating effects upon their victims. Homeopathic prescriptions for physical and spiritual illnesses have been officially acknowledged, along with the role of bomoh healers as purveyors of alternative cures that are compatible with those used by modern medicine.

Malaysia shares close ethnic and cultural kinship with Singapore and Indonesia. Its culinary styles have been deeply influenced by migrations of ethnic groups, offering a potpourri of traditions from Malay, Chinese, Indian, Indonesian, and ethnic Bornean citizens. Thai, Portuguese, Dutch, Arabian, and British tastes have contributed to an orchestration of flavors.

2–4 Serrano or Szechuan-type chiles, seeded if less heat is desired

Grated zest and juice from 1 lemon or 2 limes

To make the curry paste: pulse the garlic, chiles, lemon zest and juice, ginger, shallots, turmeric, and oil in a food processor to form a paste or use a mortar and pestle. Heat 2 tablespoons oil in a large heavy-based pan. Add the curry paste and lightly fry over a medium heat for a few seconds. Add the onions and 2 teaspoons turmeric and cook, stirring, for 5 minutes. Season chicken pieces with salt and pepper. Add them to the pan, stirring to coat them with the paste. Add the bay leaves, cinnamon stick, star anise, coconut milk, stock, sugar, soy, and fish sauces, and bring to a boil. Reduce the heat to simmer. Cook gently for 45–50 minutes until the chicken is tender. Taste for seasonings. Add the beans, cover, and continue to cook for another few minutes until the beans are tender. Serve topped with coriander leaves, accompanied by steamed rice and roti (Asian flat breads). 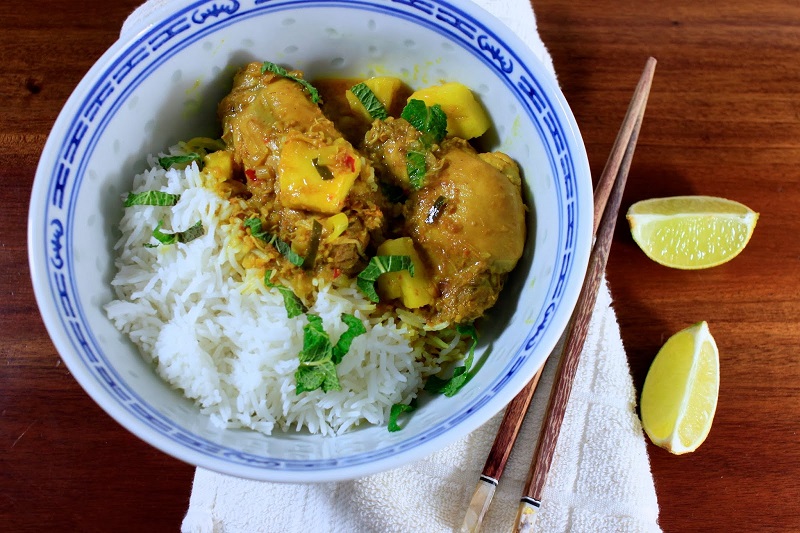