Cooking food in a tandoor oven has been an established technique for at least 5,000 years, taking us back to Indus valley and Harappan civilizations of ancient India. Egypt and Mesopotamia also used the process. Apart from the Indian subcontinent, tandoor cuisine in West and Central Asia is prevalent. Modern tandoor was brought to India by the Mughals during their enlightened empire (1526–1870).

Religious innovator Guru Nanak Dev Ji (1469–1539) was the founder of Sikhism, one of the world’s youngest religions, and the first of the 10 Sikh gurus. In order to remove caste barriers and promote equality among people, he urged villagers to build a sanjha chulha (communally used earthen cook stove) in their neighborhood. A commonly shared oven not only helped in removing caste and class barriers but also became a meeting point where gossip was exchanged. Women would go to the “oven place” with their roti breads and marinated meats to encounter their neighbors and friends so that they could share stories while waiting for their food to cook.

Early wood-fired tandoors were set into earth and are still used in India, Pakistan, and Afghanistan. Communal gas-fired versions are enjoying a comeback as the center of community life in rural areas such as Punjab, binding people and traditions together. Modern portable tandoor ovens are cylindrical clay or metal varieties fired to high heat by wood or charcoal, in which unleavened breads ranging from simple tandoori roti to more complex naans and “kulcha” breads are baked along with a succulent range of roasted meats. Temperatures in a tandoor can approach 480° C (900° F), and it is common for ovens to remain lit for long periods to maintain their high cooking temperature.

Because of the growing inaccessibility of a communal tandoor oven in urban centers, especially in cities outside of southern Asia, people have developed ingenious methods to replicate this unique cooking process in home kitchens.

Here is a recipe that simplifies the task of preparing authentic, mouthwatering tandoori chicken. These wonderful ingredients will permeate your kitchen with the fragrance of an exclusive Indian restaurant!

Kosher or sea salt to taste

In a large bowl, whisk together yogurt, lime juice, garlic, ginger, garam masala, and turmeric. Season with salt, sugar, and cayenne. Add chicken and toss until fully coated. Allow to marinate in the fridge at least two hours, preferably overnight. When ready to bake, preheat oven to 400º F and line a baking sheet with a wire rack. Bake chicken 30 minutes, then flip and bake 30 minutes more. Heat broiler and broil until skin is crispy, about two minutes. Serve with rice, raw onion slices, chopped coriander, lime wedges, and a refreshing banana-yogurt salad (raita).

Alternative: Marinate as directed and grill on the barbeque. 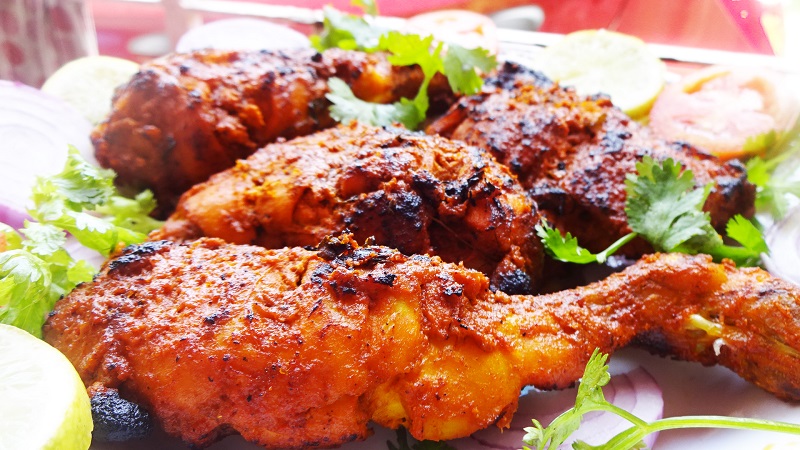