“We do not want to have contagion, or a death on our conscience for organizing traditional face-to-face parties” were the words of the director of Culture, Paulina Cadena. She said this during a meeting with the guardians of culture in which they agreed that the lavish, noisy, and colorful celebrations of the big festival in honor of the patron saint of the city, Archangel Saint Michael, would be only in a representative manner. That means that only those involved would participate. The celebrations will be transmitted via social networks.

And so the Alborada will take place on the dawn of September 29. The entrance of Souls will also be representative on October 2, as well as the tribute to the founder of the city, Fray Juan de San Miguel, on October 3. There will be no burning of traditional “monkeys” nor dancers in the streets of the Historical Center. Follow AtencionSanMiguel on Facebook to see the events.

Let us not forget that the Alborada is a luminous offering that consists of an hour of fireworks launched from the Parroquia. Traditionally, the party begins in the oldest neighborhoods of the city, which were the ones who paid for this celebration: La Estación, El Valle, and Aurora. There are kermés, music, conviviality and fun. Late in the morning, with giant wooden stars adorned with colorful Chinese paper (mounted on a pole), people go out in a parade. They dance, sing, and are accompanied by mojigangas and live music, eventually meeting at the intersection of Plaza Principal, Hidalgo, and Canal. They go around the Jardin Principal three times, and launch the thunderous pyrotechnical rockets for an hour. This year, the representative event took place with a small group of traditionalists, but the rockets lasted for an hour as they should.

The traditionalist Emigdio Ledesma used to work at Fábrica la Aurora. He previously told Atencion that the first time the Alborada took place in San Miguel was on December 8, 1924, in the church of La Purísima Concepción (Las Monjas). “The people were amazed by the giant stars which represent the light of the Virgin of Salvatierra) and the noise.”

Entrance of the Souls and súchiles

Traditionally, there is a procession in which Souls (those who have died but were attached to traditions and festivals in communities and neighborhoods), followed by Suchiles. At the end, there are local dancers, and others from different states of the Republic.

This year, the Souls (represented by small crosses) will meet near the Bicentennial Bridge—the place of forgiveness. In an interview, historian Alejandro Luna commented that the “Entrada de los Xúchiles,” as it is known, is not a sensationalist parade, but “a procession with a very deep meaning for the indigenous communities of the municipality.”

According to Luna, this procession is a commemoration of the four conquest captains and all those who died in the evangelization process in the then Villa de San Miguel el Grande. These victims are represented by the Souls, or crosses that lead the procession. Luna commented that the entrance of the súchiles is also a remembrance of a bloody battle that took place on the Calderón bridge, where many Chichimecas died. The dead were then placed on stretchers, decorated, possibly with flowers of the time, and that can be the source of the heavy offerings.

The Souls this year will meet in Calzada de la Estación, near the Bicentennial Bridge, on the morning of October 2, from there they will walk in procession to the center, and will meet with those who wove the súchiles. They will go around the Jardin Principal three times and then the offerings will be placed. The offerings are made of cucharilla leaves, which are embedded in traditional neighborhoods and communities like Valle, Cieneguita, La Estación, and Puerto de Calderón. They are mounted on heavy parallel poles with crossed reeds. In ancient times it was believed that these offerings were the stretchers to carry the dead to the cemetery, and then were placed upright over the tomb. They are erected at the entrances to the Jardin Principal, and more importantly, at the entrances to the parish of Saint Michael the Archangel. 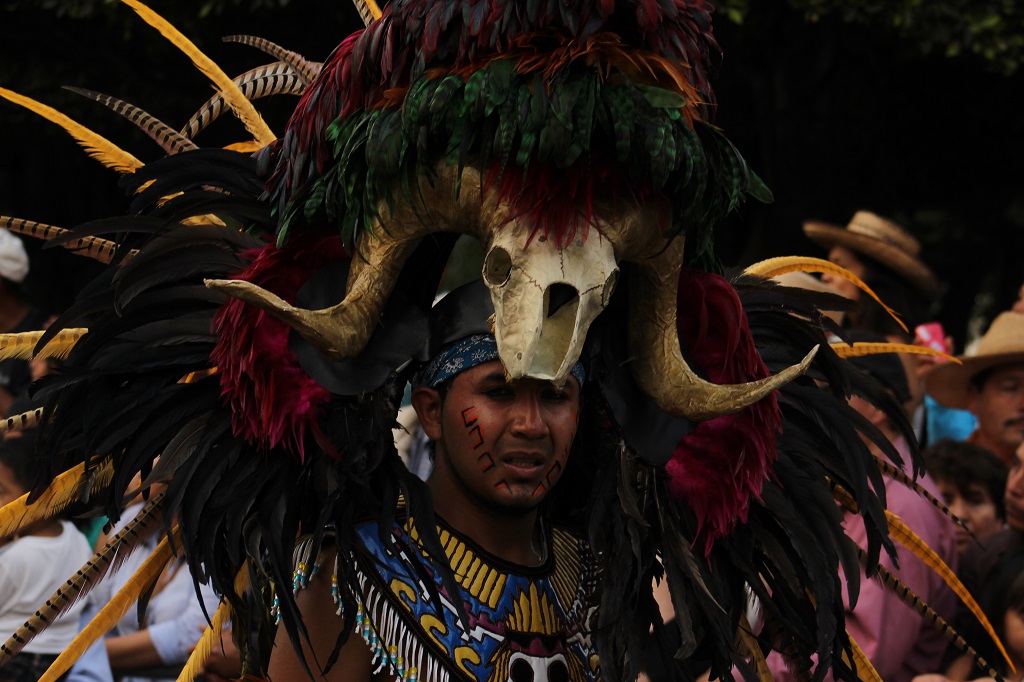 The tribute to Fray Juan is simple every year, in fact, after the feast of the Archangel San Miguel, a ceremony is dedicated to him, in which floral and food offerings are put down. But also the dancers dance in his honor throughout the day.

This year the tribute will be on October 3 in the morning. The dances will dance at dawn for periods of 20 minutes, and again at 9am.

The statue on one side of the Parroquia was inaugurated in 1942, during the fourth centenary of the founding of the Pueblo de Indios de San Miguel de los Chichimecas — now San Miguel de Allende. The party was great, and the President of the Republic, Manuel Ávila Camacho, came.

This sculpture project was requested by Emeterio Valverde y Téllez and in San Miguel it was approved by Father José Mercadillo. The work is by Fidias Elizondo, and the architectural project is by Nicolás Mavis.

The historian Graciela Cruz, who has closely reviewed the parish archives, shared with Atencion that Fray Juan was born at the beginning of 1500 and belonged to the Franciscan order. He was responsible for dozens of foundations of towns, among which are: Chamacuero (today Comonfort), Apaseo, San Miguel, Uruapan and all the towns in the mountains. Cruz stated that according to the chronicles it is known that he traveled with a retinue, among which were other friars and a group of indigenous people.

In the current area of San Miguel de Allende, Fray Juan de San Miguel would have arrived between 1542 and 1548. During that time he founded the Pueblo de Indios de San Miguel de los Chichimecas and Catholicized the natives; they eventually moved to the area of el Chorro. Cruz indicates that the transfer of the Pueblo de Indios, from the current San Miguel Viejo, to Moctezuma—monte que huma (mountain that smokes) took place because of two reasons. The first was lack of water (which she does not believe because the territory was next to the Laja River ) and the second, which she considers more plausible, because of attacks by Chichimecas who were dissatisfied with the Hispanic presence.

The chronicles, indicated Graciela Cruz, “say that Fray Juan founded towns, drew the streets, gave them a saint and instituted a celebration.” It is for this reason that Saint Michael the Archangel has been venerated ever since. Aside from the fact that the friar had the same name, Saint Michael is the patron saint of lands—like Constantinople—that are founded on war territories. Regarding the end of Fray Juan, there are two theories, the first, Cruz mentioned, is that he returned to present-day Uruapan, Michoacán, where his remains are found. The second is that he continued on his way to the north of the territory and was later killed by warlike missions. What is certain is we should pay tribute to someone.

Previous PostMasks Required on U.S. Transportation Until at Least January 2022Next PostTry the Specialty Coffee at Lavanda