Animal abuse in San Miguel de Allende, whether by owners or others, has been reported for years. In 2014, in San Luis Rey at least a dozen dogs were found burned, mutilated, or hanging from trees. Those responsible for the acts were never punished because there was no evidence; the Public Ministry only noted the crimes.

However, in 2017 an expat at Fraccionamiento Temazcalli paid a fine of two thousand pesos when she was found guilty of poisoning five dogs. At that time the Penal Code for the State of Guanajuato did not include deprivation of liberty for those responsible for the crime. The crime came under Chapter IV, Articles 297 and 298 of the Penal Code for the State of Guanajuato, but it did not include a custodial sentence against whoever committed those acts. The sanctions for intentionally causing the death of a vertebrate animal ranged from a fine of 10 to 100 times the minimum wage, or up to 90 days of community work. In 2020 the law was reformed, and today it includes a prison term.

The contrasts on Wednesday

When the water level drops in the lower part of Los Frailes, you can go through the area on foot, or by bicycle, motorcycle, or car. Some of the Federal spaces in the area are agricultural concessions, and the rest of the land is a vast expanse for recreation. Many activities take place there, from amateur golf by Malanquín caddies, to soccer cascaritas (impromptu matches), to a barbecue for a birthday party, or simply sitting and enjoying a drink while the sun goes down.

Near the dam, at the end of the road that leads to it, is a house where Miguel Ángel Araiza, his pregnant wife, and their three children live. He has poultry, cattle, sheep that he grazes in the fields around him, and dogs.

Margarita Muñoz had a white husky named Alpha. He was a three-year-old, friendly, playful, “huggable” dog. On Wednesday afternoon on July 28 Muñoz was walking Alpha near the dam grounds. At some point the dog got away from her and ran off after Araiza’s sheep, which were grazing in the area. Alpha continued running through the Araiza grounds, and Araiza claimed that it killed sheep, geese, and wild turkeys. He captured the dog, and according to Muñoz indicated that he was going to kill it, although she indicated that she would pay for the damages. Even when preventive police arrived at the scene, Araiza would not turn Alpha over to her.

According to Muñoz, she went to the D Regional Prosecutor’s Office to file a complaint. The office’s attorneys told her that they were not mediators and they would not take the complaint because there were more important issues to deal with. However, when she came with a lawyer, they managed to reach an agreement with Araiza’s wife, who was also present at the prosecutor’s office to file a complaint alleging that Alpha had bitten her son. Finally, around midnight that same day, the parties agreed that Alpha would be returned to Muñoz at 9am the next day. But the return did not take place. Muñoz says that, accompanied by security officers (who later ignored the issue in Los Frailes), she went to meet with Araiza. He told her, “your dog is already dead.” She conducted a search on her own, and found the dismembered husky on the railroad track. Justice for the dog began to be called for on social networks. A public meeting was called in Villa de Los Frailes on the afternoon of August 1.

Atencion spoke to Araiza in his home. In the interview, broadcast live via Atencion’s Facebook page, he stated that Alpha had killed a goose and wounded another, that it had also killed a wild turkey, and that it had lightly bitten his son. The dog had also scared the barnyard cattle.

He pointed out that Alpha’s owner originally denied that the dog was hers, but later claimed that he was. Because of this denial Araiza took possession of the dog, put a plastic rope through the dog’s collar and tied it (in his words), to a mesquite tree. The next morning, he went to check on Alpha, and found that the rope had been chewed through and the dog was missing. He assumed that out of desperation the dog had pushed open one of the rear gates in the fenced-in area and headed south toward the community of Pantoja. Araiza didn’t know anything more, only that the rope was chewed through, and the dog was gone.

Araiza gave Atencion a tour of his property and explained the events step by step. He insisted that he did not kill Alpha. He regrets that people do not believe him and that they are organizing a campaign against him. He invites them to return to sanity, and to have the authorities investigate and decide whether or not there is a crime. 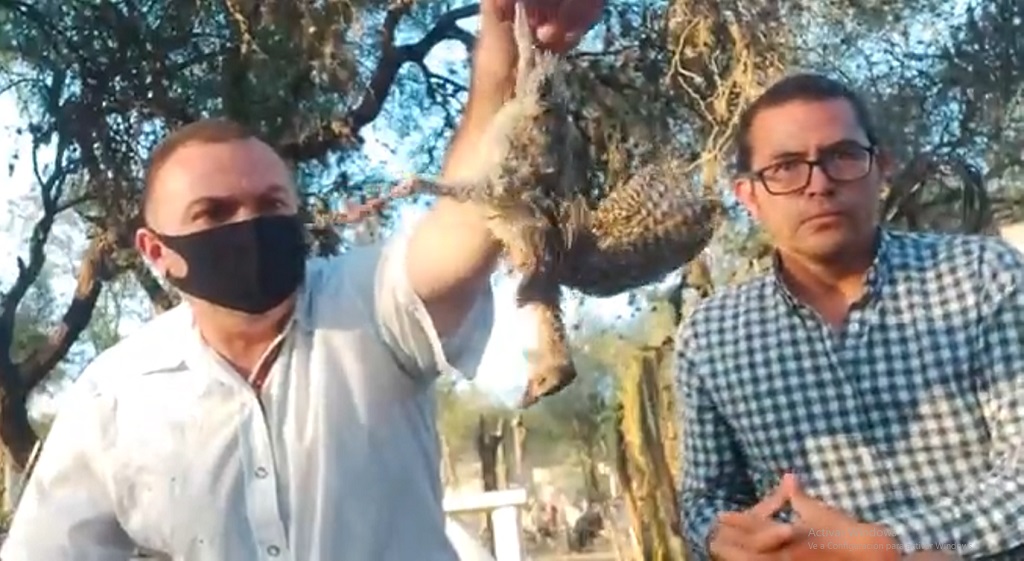 The meeting called on August 1 took place at Plaza la Conchita in Los Frailes. About 300 people gathered with their pets. There was a clear objective: they wanted the alleged perpetrator to pay “with jail time” for the crime supposedly committed. However, tempers flared until there were no more agreements or control over the original intention of the meeting, which had been to gather evidence to present to the authorities for all the counts for which Araiza would be charged for animal abuse and for threats. Instead, a group of people, with no clear objective, went to Araiza’s house. “To jail, we’re going after him. The point is, we can’t go on like this, in fear. We want to be in accordance with the law, but if we wait for the law to arrive, they will do nothing. He will not be protected from us. We want him to pay for what he did,” the crowd shouted.

Once in front of the home, they began to shout, calling him all sorts of names, from murderer, to coward. Some simply wanted Araiza to show his face and confess to the alleged crime. Others said that if he was saved by the law, he would not be saved from them. They also yelled at Araiza’s children, saying “children, your Dad is a murderer.”

After a few minutes, Salvador Ramírez, a friend of the family and a lawyer, appeared at the door. He wanted to talk with representatives of the mob, but the protesters shouted epithets at him, and would not talk with the lawyer. Ramírez tried to explain to them that there were children inside, and that if they took any wrongful action, the law would be on the side of the minors. After an hour, the protesters began to withdraw from the scene. Some threw a couple of stones that hit the metal fence at the entrance of the house, and others threw soda at the lawyer.

Atencion later spoke with a lawyer, who indicated that now Araiza and his family will have to file a complaint with the District’s Attorney Office to get a public defender assigned to him and continue his complaint, which now includes the “attack of a mob.” Atencion spoke with the staff of the Prosecutor’s Office, which indicated that their office only has one complaint against Miguel Ángel Araiza, which is for threats. That complaint was brought by Margarita Muñoz, who did not join the group of protesters.

At this moment it is not known whether Araiza’s claim that the dog was taken by someone else and killed is being followed up by the authorities.

Local Deputy Katya Soto told Atencion, “What I know is that what they are requesting is already legislated, it is already punishable, there is already a jail [term in place]. Now the judicial authority must do its job.” She added that, “the law must be applied to whoever commits a crime.” On the other hand, regarding the fact that there were children inside the home while the mob shouted epithets, she indicated that the family will file a complaint. The authorities will determine if the Law for the Protection of Children and Adolescents was not respected.

What the municipal regulation states

The Regulation for the Protection of Animals of San Miguel de Allende includes the following: Article 35 prohibits the use of solvents, corrosive poisons, materials, and sharp weapons, among others, to harm animals for the purpose of extermination or aggression. Article 73 indicates that sanctions range from a warning to a fine equivalent to one to two hundred times the minimum wage. Compliance with these regulations comes under the Office of Environment and Sustainability. If that office does not respond to complaints, they can be reported by omission to the Municipal Comptroller’s Office. The process of denouncing officials is similar to that of the MP, but is under the Comptroller’s Office.

The penal code for the State of Guanajuato

Article 297 states, “Anyone who fraudulently causes the death of a vertebrate animal will be imprisoned from six months to two years, and will receive a fine (based on the minimum wage) from sixty to three hundred days’ worth. If the methods used caused serious suffering to the animal prior to its death, the penalties will be increased by up to one half.