Little by little, Guanajuato has been seeding the land with grape vines, a return to what it was before the War of Independence. It is estimated that during this war, hundreds, probably thousands of hectares were burned in order to limit the economic support that the criollos (people of Spanish descent) were providing to the insurgents.

Currently, more than 700 thousand bottles of wine are produced annually in Guanajuato State, which makes the state the fourth-largest wine producer in the country. In Guanajuato, 385 hectares produce harvests for 43 vineyards, 137 labels, and have earned108 international awards.

Juan José Álvarez Brunell, Secretary of Tourism of Guanajuato State provided this information during a presentation of Guanajuato Tierra de Vinos. He explained that the Vendimia (grape harvest) events and others related to wine are meant to enhance and promote the state’s wine industry. These events are highlighted at the Wine Museum in Dolores Hidalgo. They also promote and support the development of viticulture events, such as VINUM in November, and the Concours Mondial de Bruxelles (World Competition in Brussels) in December.

Carlos Borboa Suárez is the director of selecting México’s participants in the Concours Mondial de Bruxelles. He explained that viniculture activity has been promoted in Guanajuato State, and that the Law for the Promotion of Wine Activity was approved in December 2020. He recognizes that “no other state has advanced in this area by generating a model in which there is a state council, a producer registry, and an award for quality. These three pillars are world-class foundations, and this has been accomplished by Guanajuato State.”

The Secretary of Tourism stated that the 10 harvest events are one reason for attracting viniculture tourism; they are also a way of giving thanks to the land for the fruit that can be eaten and tasted in the wines. They will be in July, August, September, and October. The harvest events will take place at the Wine Museum and at the following vineyards: Camino de Vinos, Toyán, Los Arcángeles, Bernat, San José la Vista, Octagon, San Bernardino, Tierra de Luz and Cuna de Tierra. They are located in Dolores, Guanajuato, San Miguel de Allende, San Felipe, and León. It will take place at “Meanwhile a Wine,” an event in Parque Guanajuato Bicentenario, in Silao. The Secretary of Tourism mentioned that this year the harvest events are expected to attract 4 thousand visitors and generate 7 million pesos.

Laura Torres, president of the Tourist Council in San Miguel, spoke with Atencion and explained that during colonial times, the current Valley of Independence—which comprises the northeast areas of Guanajuato State—was a prosperous and productive area. The land was optimal for raising grapes. It is said that Miguel Hidalgo, one of the leaders of the struggle for independence, had his own vineyards and taught people how to harvest grapes and produce wine.

These vineyards, on the orders of the viceroy, were set on fire and destroyed during the War of Independence, from 1810-1821. This land and numerous properties owned by criollos, who were part of the insurrection, had helped the independence struggle with financial help generated from their land.

The new presence of wine in the state is thanks to Ricardo Vega, who promoted the idea of growing grape vines and making wine again in Guanajuato. He started the first winery, Cuna de Tierra, and others followed. The first vineyards were planted in the 1990s by Juan Manchón and Ignacio Vega, hence the label Bodegas Vega Manchón. The first wine harvest was in 2005. The first commercial labels for Palacio de Hierro were Pago de Vega and Cuna de Bicentennial Land. This year, the harvest event at Cuna de Tierra will take place on October 16. For details, go to Vintagecunadetierra.com 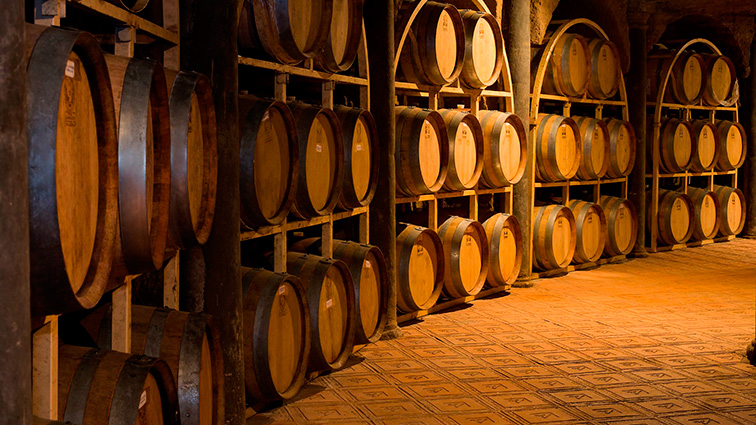 Among dreams, archangels, and water

Hacienda San José Lavista relives the glorious past of mansions that were left in the hands of foremen and servants after the War of Independence. It’s a place where the “tick tock” of time passes unnoticed. The space is surrounded by vines laden with thick bunches of grapes that will go into French oak barrels and mature below ground.

The structure is visible along the highway to Guanajuato. It was built by architects José Seoane Castro and Pedro Urquiza to look old and convey a sense of dignity. A large, wooden gate protects the entrance, and when it opens visitors enter a different world. They find themselves in a town where nature is ever present, lakes and architecture mix, and where majestic views of the Allende and Picachos dam adorn the background. It is the perfect setting for escaping from reality.

But the exterior is not everything. Inside the big house, an archangel greets and protects guests. It also stands over the dining room and living room. These rooms give way to the central pool and the bar, with views that take your breath away. The harvest festival will be held at the hacienda on Saturday, Aug. 28. The sampling and tasting of labels from the San José Lavista winery will be one activity attendees will be able to enjoy during this event. They will also sample gourmet foods and products that show off Mexican and Spanish cuisine. There will be an open bar with spirits, samples of craft beers, and performances and artists. For more information, go to haciendasanjoselavista.com

At Rancho Toyán, the magic of what awaits inside is a mystery until you enter the property. Trees are decorated with faces that give them the appearance of live trees. “Toyán is where knowledge is born; it is a Nahuatl word,” said Martha Molina, Rancho Toyán’s marketing manager. The ranch got its start because the owners wanted “to do something for the planet, for human beings, to go back and recognize what the ancestors did, as at present we have lost our way due to technology. Here, man becomes one with the universe,” said Molina.

According to her, visitors began to arrive at the ranch on their own; “they made the place open up.” The ranch offers two tours. On the organic tour, visitors are shown how to plant, care for, harvest, and market organic products. On the wine tour, visitors enter an auditorium with a chapel façade and get an introduction to Rancho Toyán. Marta Molina then guides the group to the vineyards to see the variety of grapes. She explains the care they require and how they are harvested. Visitors then proceed to the production area, where they can taste wine that is aging while they listen to an explanation about “the beginning of the magic of the grape.” Visitors are then guided 14 meters underground along a path that is about 100 meters long. The path is flanked by white and black sculptures of monks. “The cellar is a place where good and evil harmonize,” says Molina. It is underground because “we want the wine to be wrapped in the earth, to return to the belly of the earth, the place of aging where the wine will finish aging.” The harvest festival at Rancho Toyán will take place August 14. For more details, go to vinicolatoyan.com