The residents of the Presa Allende area that is currently flooded, have traditionally been making bricks but also flowerpots, and other pottery vessels. The best known were those of Esteben Valdez (RIP, 2018), but there were also those of Don Gregorio Vargas, and Consuelo Aldama. Later, when they were forced to be removed from the community they had formed, they took advantage of the new turbid waters that had flooded their works, and started fishing.

“The dam is at 15 percent of its capacity,” according to the published reports of the National Water Commission. When the millions of cubic meters of water go to irrigate the cultivated fields in the southern zone of Guanajuato, then San Miguel is left with the flooding and the residents at the banks get the opportunity to fish.

To get to Flores, you must first go through Pantoja. This is not Nuevo Pantoja, which is between Lejona and Allende colony; but to the original Pantoja, whence the residents of Nuevo Pantoja actually arrived. You pass streets flanked by raw brick structures, because this is where it is molded. You also pass dozens of ovens where they are baked, some to the right, others to the left, and then you finally arrive at the church. Once you get there, the locals will indicate the way to get to the spring on that side. “There you take the alley, go all the way down, without any turns,” they say.

There, amid the blowing wind, the setting sun, and the waves, you find: El Calamar, la Borracha, La Azul, La Marina, and twenty other boats that have been prepared for fishing. The fishing activities began in 1972, three years after the inauguration of the dam.

The flood displaced the residents like Gregorio Vargas; whose parents were living “down there” within the area of where the dam is now, and they made pots and pots. The special clay remained there, covered by the water. Like many others in the community, he had no choice but to move on to the molding and firing of bricks. Then something happened around 1972.

Don Gregorio recalls that federal government officials visited Flores de Begoña to form a fishermen’s cooperative. About 40 people signed up. “They brought a boat from the municipality of Yuriria so that we could see it, and we could build our own. “I looked at it, over and over, with a partner. And we were encouraged and began to build them [the boats]. They were made completely of wood, now they sell them made of fiberglass.”

Don Gregorio recalls that “in those days, the piece of wood, 30cm wide by 6 meters long, cost five pesos. Six pieces were needed to make a boat.” We asked Don Vargas how the boats were sealed so that no water got in. He explained, “The bed, or the base, is covered with boiling wax.” Then the boat is placed onto the waters so that the wood is hydrated, and the boat can turn correctly. In those days, making a boat did not exceed 40 pesos, because they were made for friends. Today, making one of those fishing boats can cost six thousand pesos. Although they are no longer in high demand, Don Gregorio still makes them, along with his son Roberto. 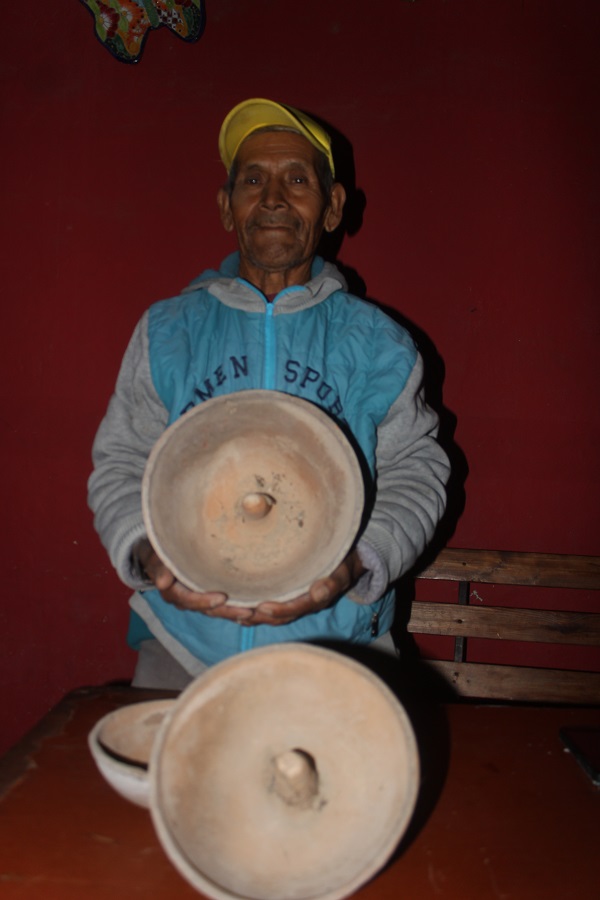 Doña Consuelo Aldama also inherited the trade of making pottery, but the different circumstances led her to become a fisherwoman. Together with the other fishermen, she learned little by little, what fish to catch, what type of netting to use, and where to get them. Now the netting marketers are coming to the Presa.

Mrs. Consuelo remembers that she would leave the pier at 1 in the morning to go fishing. By 3 in the morning she was back at her house. She placed the live fish in buckets, and then went on the road walking about two kilometers to wait for the bus to Celaya, and then to Villagrán. In Villagrán, she had a space in the flea market to sell the product where “we took it almost alive to sell it.” But when there was no sale in the market area, then she had no choice but to take her buckets and go house to house offering mojarras, charales or sardines. She knew she could sell them there, at the Presa where a buyer from Yuriria has been coming for years. But the payment per kilogram has been, and is minimal. And she knows it, because she no longer goes on the boat, now she buys her son’s fish, but since she start of the contingency she has no longer gone to Villagrán.

From Monday to Friday, at 5am, When the Presa is full, Mr. Jorge Vargas and his assistant leave Flores on their way to Don Juan, about two kilometers from the dam. Once near that community, they begin to collect the netting they threw the day before. They only fish for charal (Chirostoma), a six to twelve-centimeter fish that they later dry and sell to a Yuriria customer. But what has happened now that the dam has a low water level?

In a brickyard near the Presa we find Manuel. He is a fisherman, but now with the low level of the dam, he has chosen to dedicate himself to making bricks. It is not a matter of there being no fish, but due to the low water level, “they are all crowded together, and you don’t even know where the nets are. Better I looked for them once the water level improves,” he told us.

In the distance at sunset you could see a fisherman coming to the boat dock and we waited for him. It was windy, a bad day for fishing because the fish go to the bottom of the waters. He came bringing along netting with about 20 kilos of mojarra. “I’ve been bringing those since morning, now I went to cut nopales on the other side,” said Julio Valdez, and he showed us his bucket.

His entire life, almost 40 years Julio Valdez has dedicated himself to this trade. “I know how to do masonry, carpentry, other things, but for friends, for family. What I do is fish,” he said, as he tied up his boat La Borracha. He added “We called her that because on one occasion we went out on Sunday, and we had a cooler full of beers, that’s why she was drunk.”

He continued, “many people in the city are saying that it has not rained, that the dam has a very low level. The truth is that it has been worse. About 15 years ago the level dropped so much that all you could see was the river that passed. To fish we had to go to La Cortina. We hope that a good storm will arrive because now the fish is coming out small.”

A good season for fish is during the rainy season. A fisherman can get about 50 kilos of carp, while during the windy or dry season, it’s about 10 kilos, sometimes a kilo,. But it depends on many factors. Consuelo, Gregorio, Julio, and Manuel agree that it has not rained, but the water level has been worse. 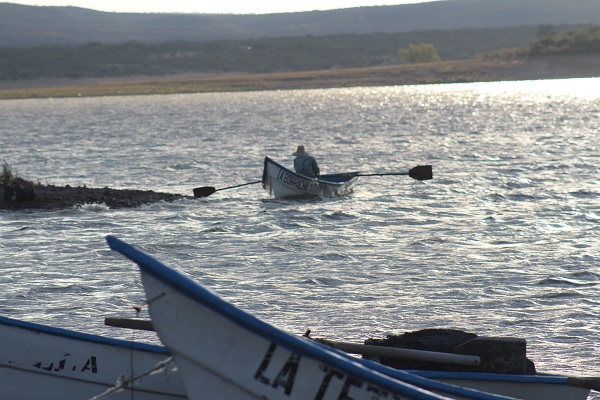 Weekend at the Palapa

During the week, dozens of people visit the banks of the Presa Allende, and hundreds come on the weekends. Roberto Vargas has taken advantage of this influx of people. He has installed a palapa at the Flores pier where every Saturday and Sunday from 12-5pm he offers food—shrimp cocktail, fish broth, and golden mojarra with rice and salad. Vargas was supervisor of instructors of the INAEBA (Institute of Literacy and Basic Education for Adults), but with the arrival of the pandemic he was fired.

His studies are as a Higher University Technician. He applied to work in different places, but none of them hired him, because wherever he went— including the industrial zones — they were only looking for people with primary education. “They are workers, and they are paid little. I have other knowledge,” said Roberto.

During the contingency, coming from a family of fishermen, he did what he could: he worked as a fisherman. Now he watches the boat dock because sometimes fish is left in the nets in the water so they remain alive. But there were cases of theft, so he was hired as a watchman. He also keeps an eye on the boats.

He is also a representative of the Pantoja Fishermen’s Union.