Doña Cruz Zamora (76) and her husband Gabriel Martínez (81), married for more than 50 years, are from the Galvanes community. On Friday, March 19, the first day of the COVID-19 vaccination process in San Miguel de Allende, they threw their official documents into a bag, picked up hat and a shawl, and celebrated their will to live. Then they took a bus to IMSS. Their four children were too anxious to accompany them.

Another Sanmiguelense, Don Martín is a cancer survivor, and has had a hernia operation and an appendectomy. According to his wife, he has undergone four operations, so death and fear are no longer a constant in his life. After the vaccine, he wants to continue working, fighting, living, working in the fields.

After each inoculation national employees handed out proof of receiving the first dose. What is not clear is when the second dose of the Pfizer vaccine will arrive for the older adults who were vaccinated at more than ten locations in San Miguel de Allende between March 19 and March 21. Staff told the recipients that 21 days after the first dose they should look out for news of when the second dose will be delivered. As we go to press, vaccinations for people over 60 has only taken place in 20 of Guanajuato State’s 46 municipalities. The uncertain timeline for the second dose mirrors the uncertainty of when the immunization will arrive at the other municipalities in the state. In fact, the vaccine’s arrival in San Miguel was postponed several days. The delay was due to the Federal government, which controls the vaccines but relies on State and Federal health organizations for distribution. In San Miguel, the Federal government is responsible for IMSS and ISSTE, under which three of the ten vaccination locations fall.

Following the announcement that immunizations would start on March 19, the municipal government asked the public not to queue the night before because of the significant drop in temperature at night. As it turned out, those who received the first doses at 8am had relatives who had held a place in line for them since late the night before. 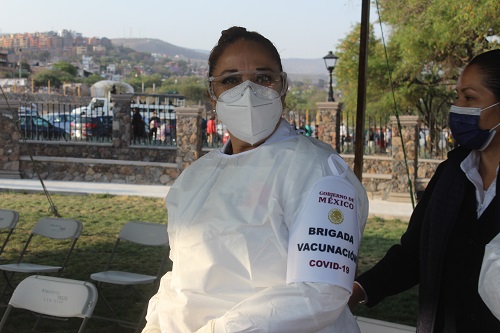 The first 25 at one vaccination site

Atención San Miguel went to many of the points where the vaccine was administered. Our starting point was Zeferino Gutiérrez Park. Here, the vaccine, heavily guarded by the National Guard, arrived before 8am. Five vaccination stations had been set up. Preparation for giving the vaccine had started earlier, with nurses instructing those administering the vaccine. “You move the container up and down five times, extract the liquid into the syringe, and return the bottle to the cooler,” said a nurse in front of a vaccination post. Minutes after 8am, Juana Muñoz, an 83-year-old woman living in the Tecolote neighborhood, was the first to receive a dose. She was accompanied by her sister Guadalupe. “I couldn’t last so many hours. My nephews, Guadalupe’s children, arrived at the park at 10pm. They were the first ones here, and stood in line. They took turns holding the spot until 7am, when we arrived. And here we are. “We are waiting,” shared Juana, prior to being vaccinated. “I have always been afraid of the virus, but it seems that it will pass. Now we will live a long time, whatever God wants,” she added.

At Zeferino Gutiérrez Park Atención staff also spoke with health workers. They indicated that at this location up to 50 people could be inoculated per hour. Anthony Christiansen, an elderly expat from the US, was in the waiting area. He could not manage the cool weather or the wait in line. Christiansen was honest: when he found out that the vaccine would be administered until the supply ran out, he said, “I asked my gardener to stand in line from 4am-8am. He gave me a token with number 25.” Christiansen’s documents were in order. “If you have legal residence, there is a government site that lets you get your CURP (personal ID code number), though that number is also on your driver’s license,” he said. What he knew for certain was that he would celebrate that first dose with cake.

Later, the line was made up of an equal number of Mexicans and foreigners, all residents of San Miguel. Among others, the foreigners were from Alabama, California, Arkansas, and New York. They did not know what time they would get their vaccine, but some said that when they got home they would enjoy a bath. 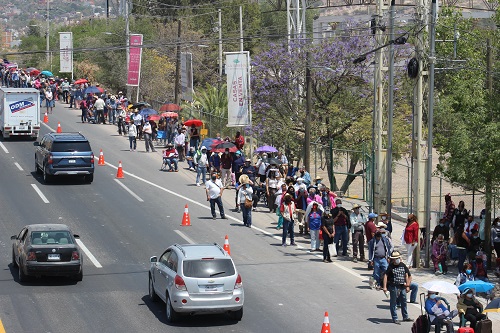 The IMSS station—Seguro Social—is fully under the control of the Federal government. There, the line started at the clinic and stretched to the Aurora neighborhood. Liz Blair knew it would be a long wait, so she hung her ukulele on her shoulder, and when boredom hit she did not hesitate to play a few notes of “Cotton Fields,” by Credence Clearwater Revival to entertain those who were wearily waiting. Rhoda Draws, took advantage of the time to sketch Sanmiguelenses waiting for the vaccine. Also in line was a nun, Natalia Zavala. She was grateful that although she had arrived emptyhanded, she ended up with an umbrella, a seat, and even a bottle of water “provided by providence,” she said.

At CBtis, one vaccination hopeful did not see the ramp on the sidewalk and fell face down on the concrete. Fortunately, he was not seriously injured and was able to get the vaccine.

At the Malanquín site, a conflict arose about whether or not there were vaccines due to the lack of communication between Federal, State, and Municipal workers. What  the staff at the site could not confirm was that because of the large public influx, sign-up sheets were distributed for that day, but they could not confirm that there would be more supply the next day. A group of at least 30 foreigners received language support from a spontaneous volunteer, Deana Spencer. She is retired, but works with Joey Merryfield and volunteers with the Covid19 Facebook page. She had received the vaccine in Alaska, but was there with her husband, who was in line for the vaccination. “They have water and energy bars. I am impressed with the organization. The inconsistency is that the volunteers are young and speak Spanish very fast. Some foreigners did not understand, so I helped interpret.”

At Unidad Deportiva the line was long, but everyone who was waiting got their vaccination by around noon.

At the Municipal Sports Commission, 500 doses of the vaccine were administered by 2pm. Jorge Vidargas, head of Sanitary Jurisdiction II, described the day as successful because of the large number of vaccines supplied.

On Saturday, March 20 the lines were shorter  everywhere, and so was the wait. On Sunday there were still doses, at all locations but fewer takers???, so a call was made through social networks for older adults to come. The vaccination drive concluded at 8pm on Sunday, March 21. The 14,431 doses of the Pfizer vaccine that came to San Miguel were administered.