San Miguel de Allende is a city where sports are constantly promoted. Whether it’s soccer or basketball, horseback riding or cycling, there is always a public or private space in town for it. However, one sport’s participants have increased over the last 15 years, but they struggle to find a space to practice it in. Society frowns on the participants, there is no suitable place for it, and the cobblestoned streets of San Miguel are not suitable. The sport? Skateboarding.

A space with a history of trouble

INFONAVIT Malanquín has been one of San Miguel’s neighborhoods with the highest rate of COVID cases—at the beginning of the contingency signs were even placed around the area indicating that you were entering a risk zone. It is also an area where crime is frequent, according to security statistics.

Now, however, there’s some hope for skateboarders. At one end of the neighborhood is a recreational park, built around six years ago. Because of the pandemic, it should be closed to sports but remains open. The basketball court backboards do not have hoops; they were removed by the COMUDE Municipal Sports Commission to discourage people from gathering because of the COVID pandemic.

Maintaining the park is the responsibility of the community, and people like Florentino Pérez, president of the neighborhood, prefer that young people meet in this recreational space instead of hiding in the many alleys of Malanquín to consume drugs or becoming gang members.

It’s where, with a lot of effort, a group of young men has found a space to skateboard. Still, they feel rejected. These youths were kicked out of the Insurgentes park and Parque Juárez. They are regularly reported to the authorities when they are in the Malanquín park—which has the only space to skateboard in San Miguel. They admit, “We know it was wrong but it’s because we were drinking beer, it was just a six-pack for 10 dudes.”

Florencio Pérez maintains that this is not a good example for Malanquín families and children. Consequently, these skateboarders are looked down on.

The number of skateboarders has grown in recent months, and they have begun using their own money to modify the Malanquín space, which was built about six years ago. One problem is that the bars are not at the right heights for performing tricks, and the edges of the ramp are uneven— “it’s badly constructed,” say the skateboarders.

They say that Javier Patlán, director of the Municipal Sports Commission, told them that he would build a space for them in a park, but after they sent him the budget he stopped answering their messages and their calls; they say he disappeared. Patlán counters that he did reply, and showed on his cellphone that they sent him the budget on Jan. 18 this year, not in October 2020, as they told Atención. 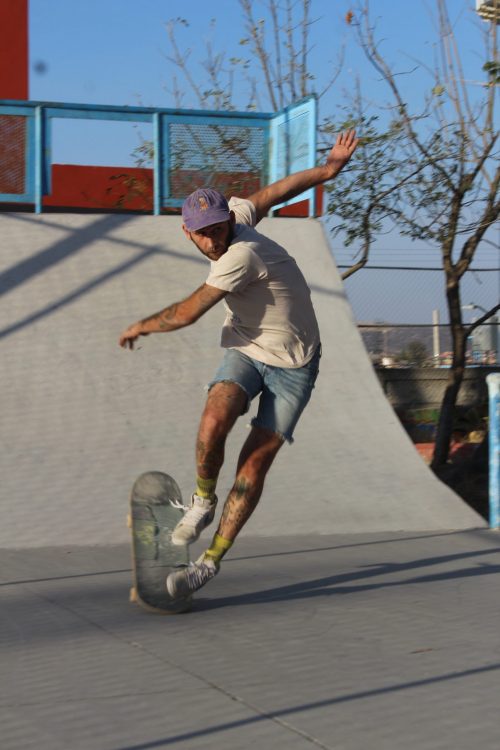 Cast out of here, run out of there

The group of skateboarders can reach up to 20 participants, but Samuel Medellín claims it can swell to as many as 50. He is a 27-year-old architect who has been skating since he was 10 years old, having learned by imitating his brothers. Medellín suffered a fourth fracture about four months ago. “It was a simple fall. I fractured my humerus,” he said in an interview with Atención. The day we saw him at the Malanquín park he was working on basic tricks

For the last 17 years, Medellín has roamed San Miguel, skateboard in hand. He and his fellow skateboarders were shooed from Parque Juárez because there was no dedicated space for skateboarding and they had damaged the sidewalks and walls. They were also kicked out of the Sports Complex (Unidad Deportiva) because the space is not designed for skateboarding. Referring to Clouthier Park (near the General Hospital), Medellín says, “That’s how politicians are. You ask them for something, and they compete with each other. Then they don’t remember. They put up a wooden ramp but it was never maintained. It’s still there, but now the wood is swollen and unpainted. It’s useless.”

Skateboarders of all ages also meet at the Insurgentes subdivision park. They built structures that they store at one participant’s house. The structures are very heavy, but they cannot be left in that park because the community doesn’t like them there, and report them to the police. “The area is empty most of the time, and when we go there the local mothers take their children out of the park and don’t let us skateboard. They think we are cholos (gangsters) who smoke marijuana and drink alcohol there, but it’s not us,” said Medellín. Now the skateboarders use the space in Malanquín. 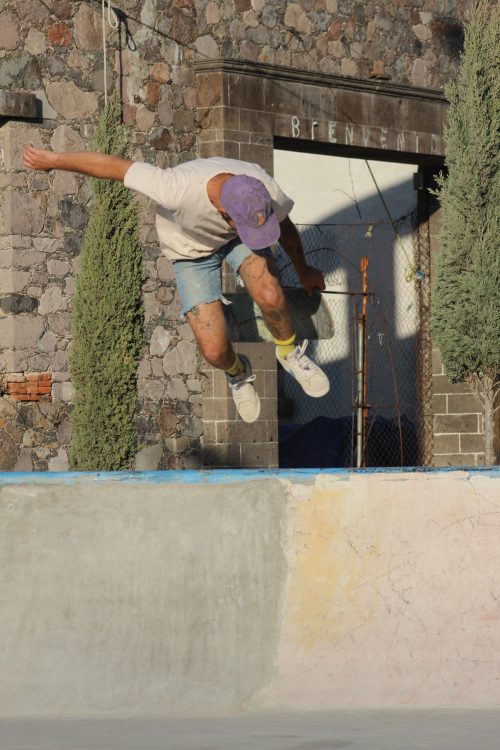 No official permits in print

With the support of Rocco, who has skated since the age of seven, the skateboarders have built two additional ramps in Malanquín park. A commercial audio and video producer and native of Portland, Oregon, the pandemic has put Rocco out of work. He arrived in San Miguel, where his family lives, in November 2020. Previously, Rocco had lived in beach towns. Asking around in Sayulita, Nayarit if there was a skateboard park in San Miguel de Allende led him to the Malanquín park.

In the US, he built spaces for skateboarding “without official permits and without a problem.” At the Malanquín park he has improved the facilities with money that friends and donors raised via Gofundme. However, they invaded the basketball court area, for which they were reprimanded.

Florentino Pérez said that about 11 years ago Malanquín neighborhood youth were territorial and constantly fought with residents from other neighborhoods.

He has promoted sports for the last 25 years, working with youths and organizing the first women’s soccer team. It was Pérez who started promoting graffiti contests, followed by the construction of the skateboard park at Malanquín.

“I prefer that young people skateboard, that they do something, especially now in the pandemic, rather than being in the alleys consuming drugs or vandalizing houses with graffiti. They have a space there.” In his opinion, those who go to the Malanquín park, whether they are from the neighborhood or not, must behave. He has found three groups that consume alcohol; one of them is the skateboarders. Pérez says that it’s not a good example for children, and adds that if police intervention is necessary, it will be sought.

Regarding the fact that ramps have been built without authorization from the neighborhood committee, Pérez said, “I think it’s fine because it’s being done to improve the space. It doesn’t matter if there was permission or not. However, if the structures begin to invade other spaces, we will have to consider dismantling them, whether the skateboarders agree or not. They will have to follow the order.”

There is never enough money

Javier Patlán, director of COMUDE, recognized that skateboarding is a sport and that while there are already well-organized associations in Mexico, none are in San Miguel. He acknowledged that last year he met with some skateboarders and asked them to submit a project. They submitted it in January 2021.

Patlán confirmed that the ramps the skateboarders requested will be built in a public park. The skateboarders will have to abide by park opening and closing hours, and avoid consuming intoxicating beverages, etc.

He denied his lack of response to the group, and said that he would soon have a meeting with them to see how to create the space and move forward with the project. “We’ll see if we provide the construction material and they provide the labor,” he said. Regarding whether or not there is money for construction, he said, “There is never enough money, but we will find a solution. We will meet soon.” Before concluding he remarked, “but the space will not open until the COVID traffic light is green,” in conformity with the health measures established by the Ministry of Health during the contingency. Pérez disagrees with this decision. 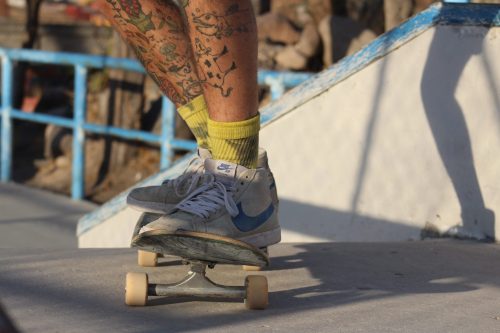 Coral, Fausto, Samuel, Fabián, Mauro, and Gabriel, are between 17 and 43 years old. They met “through the sport,” and regardless of age share the skateboarding space. Showing off their skateboards, Mauro noted that just the board costs about 500 pesos and up. Then you have to buy the axles, the wheels, and the ball bearings. “I have invested about 2,000 pesos on mine. It’s a professional board, not like my first one, which my parents bought me at Bodega Aurrera.” Rocco says that a good skateboard can cost up to 5,000 pesos.