About 284 communities in the municipality of San Miguel de Allende are considered vulnerable and marginalized. These places do not have drinking water, electricity, drainage, or a decent school. These communities are often very remote and have few families. Because of the low number of inhabitants and students, schools are not a regular part of life. However, the National Council for Educational Development (CONAFE) provides multigrade quality education in those areas, when possible.

CONAFE—which is under the umbrella of the Department of Public Education—emerged in September 1971 with a clear objective: to bring educational services to marginalized communities, and to provide Mexicans in those areas with the tools to better face the challenges of their daily lives. This institution relies on the work of young volunteers, called Community Education Leaders (LEC), who have completed their high school studies, have limited resources, and wish to continue studying.

CONAFE has nine local offices in Guanajuato; one of them, which coordinates the area of ​​Comonfort and San Miguel de Allende, is located in San Miguel.

José Luis Chávez, coordinator of CONAFE in San Miguel, previously indicated that up to 140 young people are recruited annually in the city to teach for a year in 80 rural areas.

LECs know that they will be sent to very remote communities, where they will teach multigrade groups of preschool, primary, and secondary students, which can range in size from five to 20 pupils. The young people also know that they will be in a community where the inhabitants will provide food, and that they must adapt to the local food customs, and that they will be provided with a space to sleep; they are also aware that on some occasions there may not be electrical service. Because of these challenges some quit. Those who stay have a passion for teaching and a desire to continue improving themselves. They subsist on the less than 2,000 pesos from CONAFE, which covers their transportation expenses.

The LECs also know that if they complete the year they will receive a scholarship equivalent to 30,000 pesos so that they can continue with their high school or university studies, and 60,000 pesos if they serve two years. If they wish, the money can also be used to learn English, for computer studies, beauty trades, or other skills. 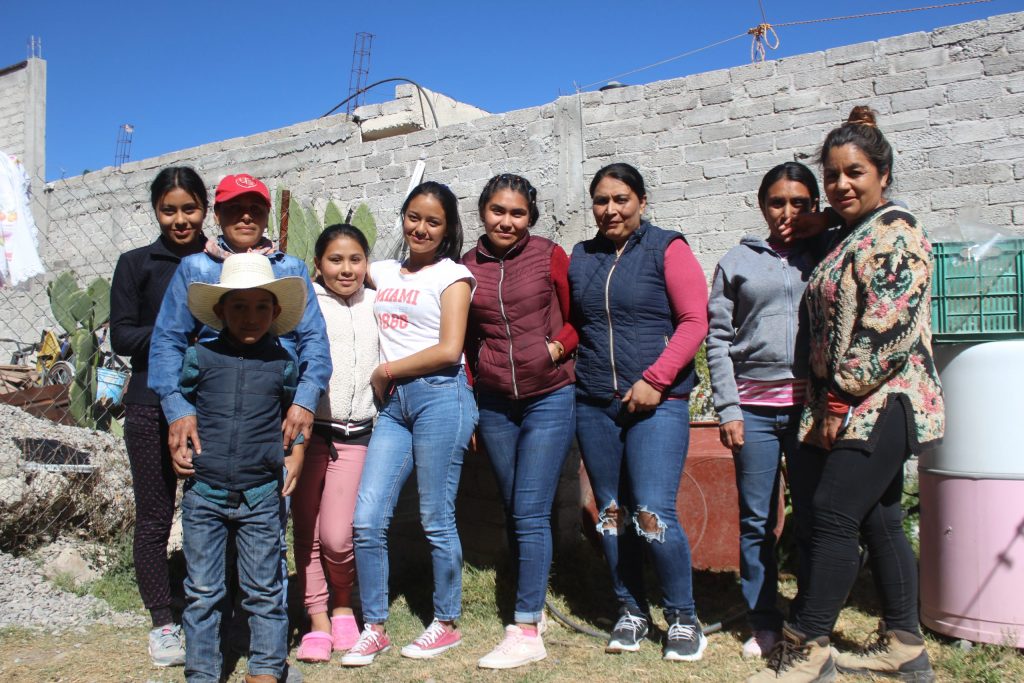 Elpidia Carmen was born in Charape, married at 17, and had 15 children, eight of whom are still living. But tragedy struck “over three years”: her disabled son, another son, and her husband died. She had to move from Pinalillo to Jalpa (where she rents a room), following her daughters who had migrated there in search of a better life.

Ángeles Ruiz lived in Pedregudo with her two daughters, but up in the mountains the opportunities to improve her housing situation and her life are few when the land does not produce and there is no spousal support. Further, the CONAFE school in Pedregudo closed due to lack of students. Ruiz therefore decided to migrate to Jalpa, where her daughters could have access to education.

In addition to the Pedregudo school closing, so did the one in Puerta del Aire. As a result, students had to walk—or travel by burro or bike—to school in Charco de Sierra. And with the pandemic, the school is not operating. The children have not received any schoolwork this school year.

To reach Pedregudo, which translates as stony, you have to go up the mountain along a path that lives up to the name of the final destination. If the driver is careless the vehicle can skid; some sections are impassable without full concentration. Until three years ago, five families lived there. The approximately 10 children meant there was a CONAFE school.

Among the inhabitants was Ángeles Ruiz, a 40-year-old woman. Her two daughters, Ángeles and Priscila, studied at the multigrade school. Ángeles Ruiz did for the community what no one ever imagined accomplishing. She approached the local government in 2012-2015 and managed to get a vehicle-worthy road built to her community (although that improvement now only remains in memories), solar panels for her and her neighbors, and a decent school room for the students who had previously studied in a hut. Also while Ángeles was the community delegate, a rainwater collection tank was built in El Pinalillo, and water was transported to Pedregudo in water tank trucks.

When her husband abandoned her, Ángeles decided that she needed to seek a better future for her daughters so they could study, learn, and better themselves. In her community, families live off of what the land offers during the rainy season, and the harvest is shared: a portion goes to the squirrels that eat the sown seed; a portion of the sugarcane goes to the grasshoppers, and what remains is harvested by the farmers.

In Pedregudo, the man who lived in the house next to Ángeles died; another woman moved with her children to Querétaro; another family moved to San Miguel de Allende, and Ángeles moved to Jalpa with her daughters, Priscila and Ángeles. Up in Pedregudo, only Gloria, her three children, and husband remain, along with another family with two children.

CONAFE stopped sending teachers to Pedregudo. “We stayed a year and a half without knowing what was going on. I taught them what I could at home, but it wasn’t enough,” says Gloria, who is not attracted to city life. “We were told that since there were not enough children, they would not send a teacher.” Now the children go to the CONAFE school in Pinalillo. To get there, they have to walk along footpaths for an hour, or ride the burro. One goes to elementary school, another goes to high school.

In Pinalillo, one inhabitant feels that the school was abandoned, but she reflects, “Well, we are in a pandemic.” In fact, in Pinalillo, where about 11 families live, no one has contracted COVID. “We entrust ourselves to God that it doesn’t happen,” the Pinalillo resident says.

In order to obtain provisions, residents go to Querétaro or Jalpa every two weeks. It takes about 50 minutes to reach either destination.

Gloria says that the water collector tank “is almost empty, so we’ll have to carry water from a spring in the stream. There was a spring in El Pinalillo but people fought over the water, and it dried up.”

The hamlet continues to shrink as people keep emigrating. The remaining families do not know how long their school will last if families continue to leave. 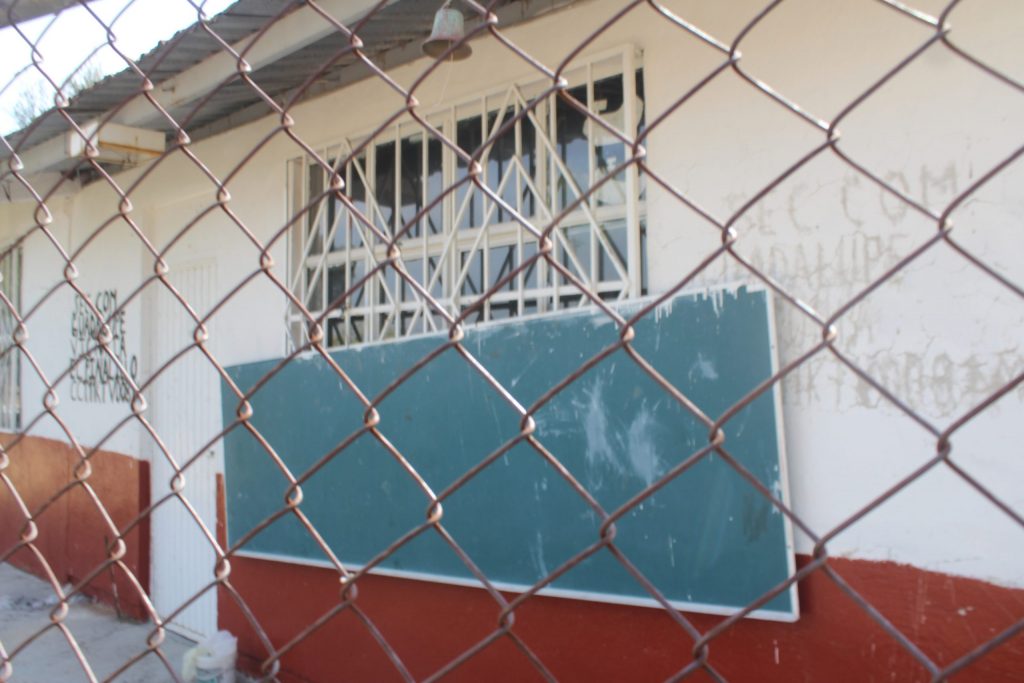 Rosario Licea Perales, director of Development and Welfare in the municipal presidency, said that from 2017 to 2020, support for community schools of this type continued. An investment of 1.8 million pesos went to construct roofs, dining rooms, fences, and classrooms, among other works. According to data from Licea Perales, among the 22 schools that benefited are Estancia de Canal, Los Guías, San Isidro de Bandita, Guadianilla, Tlaxcalilla, Los Reyes, San Juan Juvenal, and Los Juárez.

Last week Atención tried on various occasions to contact the head of CONAFE in San Miguel to find out about the recruitment situation of young people for the teaching service, as well as what they are doing during the pandemic, but there was no response. A mother of students in Pinalillo said that the teacher comes once a week to review homework and deliver new assignments.