At least 1,200 people live in the community of Las Cañas. Two years ago, its well collapsed, and since then each family survives on two barrels (about 500 liters of water) per week. The community is close to private ranches with their own wells: Loreto, Diamante, and La Noria, which sometimes sell water at a cost they consider “high” but necessary.

The city has initiated the Ignacio Allende Acuaférico project—which includes drilling seven interconnected wells from the south to the northeast of San Miguel. However, communities like La Estancia and Rincón de Canal, which are close to the hydraulic network are not being included as recipients of the potable water.

The lack of drinking water is not only in nearby communities like La Estancia, but also in more distant ones, like Los Toriles, Cinco Señores, and El Pedregudo, which depend on rainfall for water. There, the federal government built water-collecting tanks, although in the case of Los Toriles, the tank was not completed until the local government approved a budget of 350,000 pesos to finish it. In the case of El Pedregudo, whose tank was built in El Pinalillo, the connecting pipeline is full of leaks, so when it rains, only a third of the water reaches the final destination. Due to the lack of rain the tanks are now empty, so the San Miguel municipality provides drinking water transported by truck to those communities once per week or every two weeks, or even monthly. 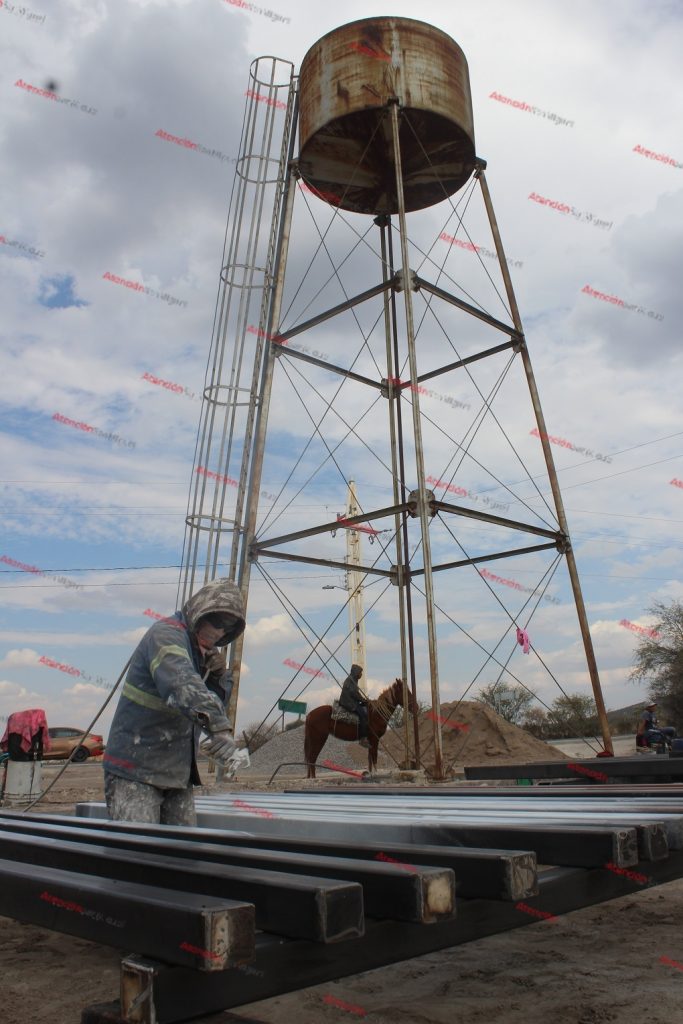 On Dec. 18, the governor of Guanajuato Diego Sinhue Rodríguez, together with Mayor Luis Alberto Villarreal, cut the ribbon of the recently restored paved road that connects various communities, including La Palmilla, La Palma, Las Cañas, Los Juárez, and Los Guías. Repaving the almost seven kilometers cost 15 million pesos. But something the residents longed for more than the road is clean water.

The local administration gave water tanks to 41 families from Las Cañas. “With this support, they will be able to carry out their daily activities in a better way,” the government said in a statement. Each water tank has a capacity of 5,000 liters. So now they have water tanks, but they do not have drinking water, and the water truck that goes there every Thursday only delivers 500 liters of drinking water per family (regardless of the number of members in the household). The service is free.

Josefina Estudiante knows that it is not enough water. “The well was drilled about 40 years ago,” she recalls. The one tap was by the school, and people organized themselves to fetch water. Then, little by little, pipes were laid,” she told Atención.

Estudiante continued, “The well serviced three communities: Las Cañas, Los Guías, and Los Juárez. Eventually not much water came out, and the pump began to break down every so often. It gave out two years ago because no more water was coming out.”

Two years ago, the administration promised water for the communities and drilled a well in Las Cañas—without asking for contributions from the inhabitants. Then it allocated 15 million pesos to construct the network that is in a dilemma: In Los Guías, the elevated tank is being assembled, as in Los Juárez; however, in Las Cañas the supply tank was to be located “on the hill,” but a private individual has prevented construction materials from being transported through his property to the work area.

Francisco Jiménez, director of the Potable Water and Sewerage System (SAPASMA), said that they should have water in the next two months, with or without a tank in Las Cañas. Regarding the administration of the well, which is sometimes handed over to the residents of the communities, he said that he still does not know if it will be administered by SAPASMA or water committees formed in each community.

Estudiante said that when the old well worked, they paid 80 pesos per month, per family. Now, however, the water delivered every Thursday is not enough, and they must find a way to survive. Private ranches with wells sometimes sell them water: filling a 450-liter tank costs 270 pesos, while a 200-liter barrel costs 40 pesos.

María Guía agrees that they don’t have enough water, “Here we barely have enough. I receive two barrels’ full as a senior citizen, and my daughter also receives two. We use the water with which we wash our clothes to water the plants, wash the patio, and even flush the toilet,” she says.

The day Atención visited the community, several women were waiting for the water truck near some dry fountains. They sent a message to the administration: “Send us more water; this is not enough for us. And get the well running.”

In a press conference, SAPASMA boasted of its grand project to build seven wells in the next 30 years that will bring water from rural areas to urban areas. That will be possible with the drilling of six or seven wells that will be located in San Marcos, San Marquitos, Corrales, Flores, Don Diego, and El Mirador.

The drainage basin in the San Marcos area is about 20 meters deep, according to farmers in the area. At present, they and people from neighboring communities worry that once the water begins to be extracted, their neighborhoods will be depleted. In this regard Jiménez, the SAPASMA director was clear, saying “There is always a risk of depletion. How or when, I don’t know. If those communities’ wells were to fail there would be no plan B, because ours would also fail.”

Projections are that 1 million 80 thousand liters of water per hour will be provided between the six or seven wells. The wells will be drilled on the east side of the railway, and the infrastructure, which includes a reservoir will be built behind the Sports Complex. Water would be piped from there to the water tank planned for Cerro Tres Cruces; from there, the water would be distributed to the upper and lower parts of San Miguel.

“This aquifer is the core of the most ambitious infrastructure program of water distribution in the history of San Miguel de Allende, and is supported by the Municipal Program for Urban Development and Territorial Ecological Planning of San Miguel de Allende 2019-2040,” declared the municipal administration. It added that the project’s investment is 165 million pesos, and that work has already begun and should conclude in the first half of May.

Work will “begin with drilling wells, and continue with connecting lines and the construction of a pumping station for water distribution.” This project, SAPASMA officials say, has been in the works for three years. Jiménez stressed that the National Water Commission has complied with the procedures and requirements for drilling, so the permits should be released shortly.

In addition to the aquifer project is construction of a wastewater treatment plant attached to the current one, with an investment of 230 million pesos.