Atención had a conversation with San Miguel’s municipal president, Mayor Luis Alberto Villarreal. He shared a message for the community, which he says has supported the municipality rising up in the face of this year’s complex conditions. Villarreal also told us about projects lined up for 2021, including his intention to seek a second consecutive term as mayor.

Speaking about 2020, the mayor said it was a difficult year for everyone, to say the least, as it came on top of an already difficult national economic situation. He cited the dismantling and inefficiency of the public health system, a drug shortage, and of insufficient treatment for people with chronic degenerative diseases and for children with cancer. Then the pandemic came and changed the perspective on life. “It made us realize the fragility of life, but also our strength—that as a society and humanity we have to do our best to survive the pandemic that has overtaken us. There is an indelible mark on me of those who have lost their lives due to COVID-19. I have eternal gratitude for and sincere recognition of the medical personnel, not only of San Miguel, but of the world, who are literally risking their lives to save ours; I thank the non-governmental organizations, women and men who, faced with the pandemic, came as Lorca said, ‘like blood to the wound’, without being summoned, immediately trying to heal the pain, to heal.”

The mayor mentioned Corazones Unidos, a conglomerate of NGOs that, hand in hand with the DIF (National System for the Integral Development of Families) and the local government, has worked so that Sanmiguelenses did not run out of food. Villarreal noted that his gratitude extends to “all those who have remained stoic, disciplined, with the necessary temperance and love for their neighbor during these long and difficult months, taking care of ourselves, taking care of each other, following the sanitary measures, and making all kinds of personal economic, social, and cultural sacrifices. We can only thank, acknowledge, and tell them that we feel—despite the harshness of 2020—proud. We have taught ourselves to be on our feet, because we have learned through pain and adversity that a better world awaits us; to improve habits and value things that perhaps we had already gotten used to and did not value. It is worth doing.”

Villarreal continued, “Among the bad that this tragedy has left behind, it will be necessary to find the good and build a better 2021 for future generations, with the conviction that the best for everyone is coming. I send out an affectionate hug.”

The year was difficult, the mayor acknowledged, but he asserted “with truth and data” that San Miguel has been the best municipality in Mexico of more than 200,000 inhabitants in terms of the attention given to the situation. He added that this must continue as long as necessary. The mayor remarked that the city has worked so the economy can gradually recover “with investments that generate jobs and infrastructure, like never before in history.” 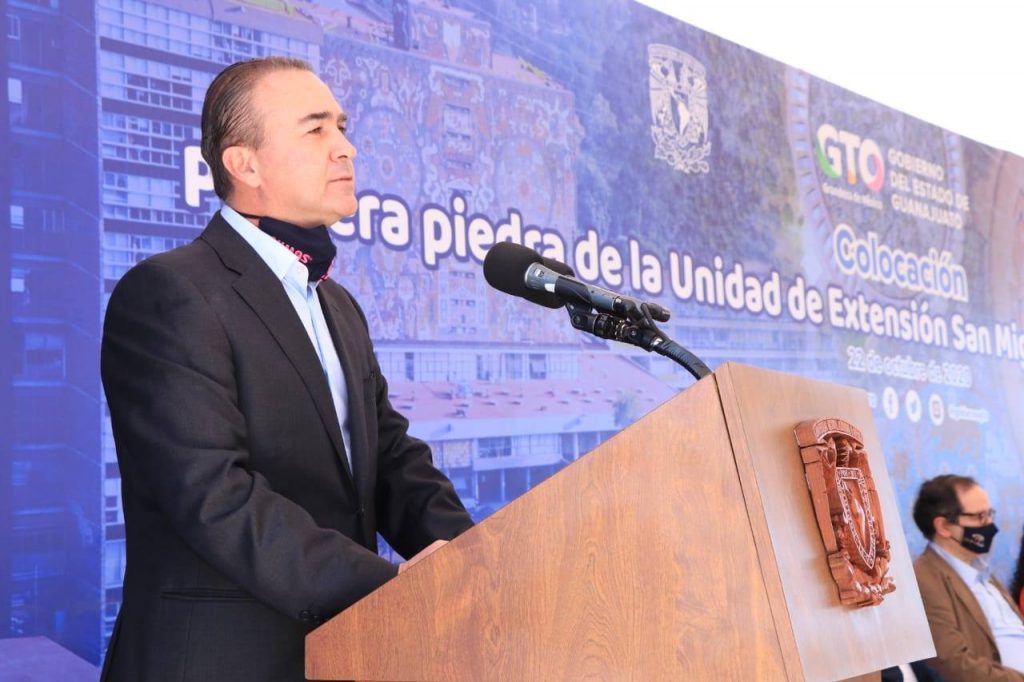 Intense construction in 2021, a renovated stadium

Villarreal clarified that he will continue to work “with an unstoppable heart” until the last minute of October 9, 2021, the end of his term. “I was democratically elected by a majority of the citizens, and I will work until October 9, not one more day but not one less. I will not betray the people.”

Villarreal commented that the UNAM satellite campus will be inaugurated. He mentioned the already commenced acuaférico or water system—which will have seven wells to guarantee potable water for the next 30 years—but also “the great infrastructure project” of the Wastewater Treatment Plant (along with the current one in Presa Allende), which will be capable of purifying up to 300 liters of water per second—”historical infrastructures,” he noted.

“We will continue working on public spaces with the citizens that use them to guarantee that they belong to all and not just a few. As far as I understand, those who charged as referees for matches in Juárez Park and decided who played in the matches, and others who thought they were the owners of the bathrooms are offended. However, the majority (99.9 percent) want a park in its current condition by transparently using public and private investment through boards of trustees to provide maintenance,” said Villarreal. The regulation to create boards of administration for the Juárez and Zeferino Gutiérrez parks has already been approved; what remains is for citizens to convene and projects to be presented in order to choose who will make up those boards.

This is an issue that a few dozen citizens have opposed, but the mayor asserts “those who do not know the story, or are making it up, do not understand what boards of trustees have meant for San Miguel.”

Furthermore, Villarreal indicated that he will continue the construction and reconstruction of urban and rural roads. On Dec. 23 he announced that reconstruction of the Capi Correa stadium would begin. The project will have a 30 million peso investment to produce a professional soccer field, a track, dressing rooms, bathrooms for fans, and a new facade. “Great news for soccer fans,” said the mayor. This project will be near the newly renovated Stirling Dickinson baseball field. “This is how we achieve professional, semi-professional, and amateur spaces; they are a commitment to present and future generations.”

Moreover, there is the area where the Tuesday tianguis (open air market) space is located. It has six areas, three of them covered. Villarreal said that in the first trimester of 2021 the rest of the area will be covered “because the people deserve it.”

On the subject of the arcade on Avenida Guadalupe, inaugurated on Dec. 24, Villarreal remarked, “For those who live around Avenida Guadalupe or Cuevitas, the area is renovated, modified, and finished. Those who had their chance to govern but instead stole public money, and/or were incapable of governing—or were in any case not committed—can be very upset. Today they dare say that the Avenida Guadalupe portals were built because we want to remove the merchants; it is the opposite. We want to dignify them, but it is also for the thousands of San Miguel residents who go and deserve to have a space with the details which we are all proud of.” 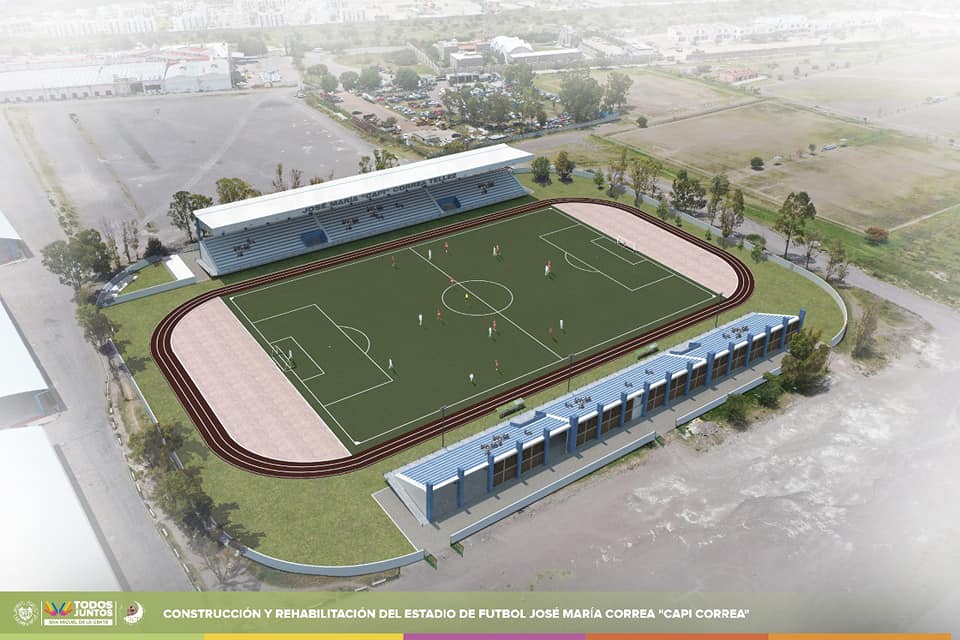 Recently, Mayor Villarreal, whose term as mayor began October 10, 2018, and ends October 9, 2021, registered his intention with his party (National Action Party, or PAN) to run for mayor with that party. The public’s reaction has been mixed.

This was his statement in full, when we questioned him on the subject: “First I will respect the rules of the game. As of this month I have been a member of PAN for more years of my life than not. I joined PAN out of conviction. I believe in the party’s Christian social doctrine, in the liberal voices of great figures like Don Manuel Gómez Morín and Don Efra, an exceptional Mexican. I believe in panistas like Don Salvador García, who started the transformation of San Miguel; he was my friend until the last day of his life; I respected him, I was with him and I was loyal to him, as I have been to the party.

Once the PAN determines the candidate, if I am chosen of course I will start the legal procedures of an inclusive campaign for the love of San Miguel, with hope, joy, enthusiasm, proposals, with a list of expenditures open to citizens, not only to members of the party.

This is a great time for Mexico, for democrats, and only those who know how to lose know how to win. [We will see] who has the greatness to stand up and who has the humility to accept the triumph when the people and the majority determine it. I’m excited, Let’s wait for the outcome. Once that happens, what I can guarantee is that all together we will continue with the transformation of San Miguel. For those who say ‘That Villarreal again?’ I tell them to go to the polls, where the people rule. I have submitted myself to public scrutiny, I have always accepted my responsibilities and will continue to do so. The only thing that moves me is to serve the municipality and support others; I have done so from the outside and within a public post. I have always invested my heart, passion, and capabilities, however limited or extensive, and will continue to do so. It will be the people who will make the determination, and I will abide by their will. I will defend the vote. When the PAN has lost we have accepted it, when we have won, opponents are faced with a fierce defense of the vote and the citizens’ decision.”