Featured in the pic: Dylan Terrel

In recent years San Miguel de Allende has seen hailstorms, like the one in July 2019, and atypical snowfalls, like the one in March 2016. These, along with floods and droughts are affecting inhabitants, but also one of the sectors on which up to 60 percent of San Miguel’s GDP depends: tourism.

The drought this year has resulted in the Allende Dam falling to 17 percent capacity. Residents of neighboring Pantoja, Flores, Don Diego, San Marcos, and other nearby communities say that there have been years when the level has been even lower.

Secretary of the Environment in Guanajuato María Isabel Ortiz said that her department works with the local government and the public sector to combat the damage done by climate change.The government is not alone in the fight.

In the same vein, ejidatarios—or commonland shareholders—do what they can to prevent soil erosion and help recharge the groundwater tables. Aided by the authorities and the public, they contribute to helping water seep into the subsoil.

After almost two years of cooperation between ADAPTUR—a project financed by the German government that is dedicated to helping the tourism sector adapt to climate change—civil organizations, the state, and the municipality have agreed to guarantee future actions to adapt to climate change in San Miguel. Now, according to Mexico representative Thomas Schneider for GIZ, an intermediary organization between the German and Mexican governments, the responsibility is now in the hands of the local governments because its organizations have already completed their corresponding work. San Miguel was privileged to be chosen as one of only three locations for measuring climate impact and seeking strategies for combating it. The other two are Riviera Nayarit and Riviera Maya.

“Investing in an integrated management of the basin the creation, care, and conservation of natural areas; soil restoration; the establishment of green belts and biological corridors; and the recovery of river beds are valuable opportunities to guarantee the future of San Miguel de Allende. Joint work between the different sectors of society, public-private alliances and the leadership of businessmen are key elements in facing the impacts of climate change,” representatives of ADAPTUR pointed out.

At the signing of the collaboration agreement, Dylan Terrel from Caminos de Agua celebrated the joint effort to combat climate change in the region. “We are at a critical moment. Everything is complicated by climate change. It is depleting the aquifer, which is dropping three meters per year, with 30 percent overexploitation. The water that remains is contaminated with arsenic and fluoride,” he said, adding, “We take advantage of rainwater, but we will have less every year, and there will be floods and droughts. We must take advantage of all sources of water. We have to heal the groundwater tables. Where will the water come from in 30 years?”

Guanajuato Environment Secretary María Isabel Ortiz addressed the subject in an interview with Atención in which we asked her about the specific actions her department is working on with the municipality regarding climate change. She responded first with a grateful acknowledgment of the German government, which has organized the project without obligation. “The point is that we are all going in the same direction. The priority is [implementing] adaptation measures to climate change—not in Guanajuato—specifically in San Miguel. The great challenge is the water issue. There is significant water stress,” she says. “There is little water, but there are atypical rains and floods, a reflection of the change. We must act. One of the strategies is [focusing on] ecosystems. The work that NGOs do. I was in [the community of] Doña Juana; they do reforestation, soil conservation, and water conservation. They collaborate—NGO, state, municipality. Resources are insufficient, but they add up. We will emphasize the issue of Protected Natural Areas. San Miguel has them. We will seek to strengthen environmental services. We are working on using vegetation as ground cover. It will allow us to have enough water in the aquifers; vegetation regulates temperature, so we adapt. We will take action. One of our projects is rainwater harvesting with purification systems for water potability. Taking these systems to communities that do not have drinking water allows them to drink the water,” she remarked.

Director of the Environment and Sustainability for San Miguel de Allende, Francisco Peyret said that among the actions taken to combat climate change are the restoration of soil, and water filtration to the groundwater tables through reforestation. “This year we hope to finish planting 200,000 trees,” he said. He indicated that his department is working with the Guanajuato Ministry of the Environment on cleaning rivers and streams and on rainwater harvesting systems for potable water, as well as on solar heaters to avoid CO2 emissions.

Agustín Madrigal, from Salvemos al Río Laja, emphasized that each change in land use, as well as the uncontrolled extraction of stones from the Laja, not only changes the riverbeds, but creates conditions for flooding that damages the natural habitat of flora and fauna.

He celebrated the signing of the agreement and called for everyone to join public, private, or civil sector initiatives so that the city and the surrounding communities can continue to offer potential for the development of low-impact tourism attractions.

The Tourist Council joins President of the Tourist Council Laura Torres who indicated before the meeting that in the tourism sector there is “a commitment to sustainability to protect our ecosystem, jobs, and source of wealth. There is total commitment. Protecting sustainability also means promoting all generations. The sector will be following the guidelines and actions that can be generated for the plan to be successful.”

Almost three kilometers of stone walls have been built by the ejidatarios of Doña Juana supported by Henry Miller of the organization El Maíz Más Pequeño. The idea is simple, but clear: avoid soil erosion and slow water flow so it can seep into the groundwater table.

The idea is not new, but it is efficient. Miller has worked with ejidatarios in the construction of “stone on stone” walls without mortar to stop erosion, and in the most serious cases, for soil to be restored. The walls help retain soil, water, and moisture that will eventually induce regeneration of native fauna and flora.

Currently, 42 hectares have been worked on, and if the walls were joined, they would add up to 2.77 linear kilometers. The goal is to reach 300 kilometers, in order to—in the short term—recover the environmental functions and services of the Támbula-Picachos micro basin, and benefit the general environment. 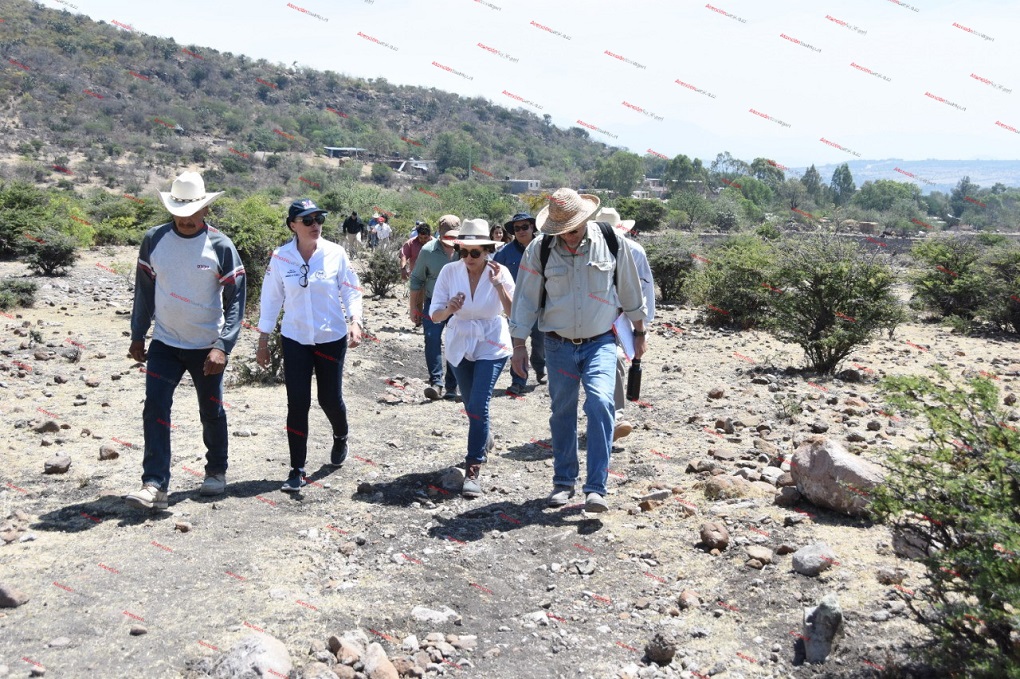