One of the largest migrant communities in San Miguel is La Talega. Don Rutilio Hernández, representative of the community, says it was founded in the mid-1700s. There, the Holy Cross, San Isidro Labrador, and San José are venerated.

It is a place where traditional festivals have a role in the day-to-day, where they are fighting against the disappearance of the yunta— the ox team they decorate with flowers, fruit, bread, and all kinds of food that is then taken to the respective venerated saint as an offering. It is where the marota, an androgynous character, travels in a cart wearing a mask, and is kidnapped by the caporal, or foreman, as entertainment for this pagan festival. La Talega is the place of big American trucks, locally referred to as “Texas trucks,” but also the home of migrants, those who leave and entrust themselves to their saints, hoping to return each year to spend the holidays in their birthplace.

It is in this community that the annual migrant mass that is organized in December has for years filled both the interior of the religious sanctuary and the atrium beyond capacity; where there is barely space to fit the faithful who come to thank God for one more year of success and for allowing them a healthy return home.

The festival honoring San José began in the 20th century. Since there was no church, only a bower, around 1950 Hernández’s ancestors laid the first stone of what has served as a church for the last 70 years. “I remember the first stone; the spot where they placed it was rectangular, and we want to save it,” he says.

There is only one entrance to La Talega: it is paved and surrounded by corn crops and a few houses. At the end of the main street is a colossal construction project—the community church. So far it has cost about 8 million pesos, and is an important project. It has received a commendation from the archbishop for the community’s dedication and progress in the project.

There, between beams, wires, and workers, Don Rutilio Hernández, whose ancestors built the first church, welcomed Atención. He shared that the idea of building a new church had existed for ten years, but it was difficult for community members to agree on how to proceed. Finally, this year, the migrants agreed to contribute amounts ranging from US$20-100 per week to construct the temple, with the intention of building the most important religious center and place of gathering in the area, possibly becoming a parish.

The municipal administration has paid for the construction labor, work that has been fulfilled by community members. Although there is still no date set for completion, 50 percent has been done. The expectation is that by December the building will be at frame stage, with most of the structure and infrastructure complete. Antonio and Pamela Rangel, the architects hired by the community, described the project as having a main nave, bell tower, baptistery, chapel of forgiveness, two multipurpose rooms, and a main altar. It will also have a sacristy and a house for the priests. The municipality is investing 1 million pesos in the project. 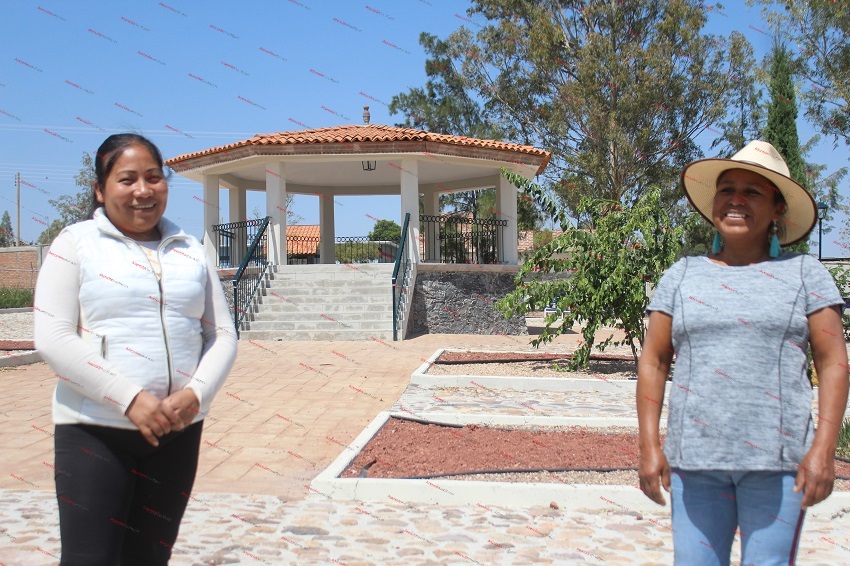 The municipal government has contributed public resources to the project in La Talega, promoting community participation. This is one of 300 projects being carried out in ​​San Miguel’s urban and rural areas. These projects range from street construction to renovating facades and painting houses, to rehabilitating and constructing public squares. In addition to visiting La Talega, Atención visited Santa Cecilia, a neighborhood working with the PAR program (Renewed Action Program).

There, the neighborhood chapel, which also started as a bower, is sober; it has a gabled roof with metal sheets, modest walls, and wooden benches built by the congregation. As in La Talega, the inhabitants of Santa Cecilia collaborated with the Department of Social Development to construct a public square, which was inaugurated in recent weeks.

The square has benches, lamps, walkways, plants, and a monumental cross in the center; it is a square that, according to the neighborhood president, Angélica Tovar, “anyone would like to have.” It went from being a parcel of land to becoming a meeting place that residents are anxious to use once COVID-19 contingency measures are lifted.

“I really like going to parks, to fields in the afternoon; before there was nowhere [to go], now there is,” said Conchita Aguilar, a resident of Santa Cecilia. Araceli Vázquez, member of the construction committee, said that the community contributed stone for the project and “everything else was provided by Social Development.” The project cost half a million pesos.

The community of San Agustín, which is on the highway to Guanajuato, now has a proper square with exercise machines, a kiosk, a soccer field, plants, and a sculpture of the patron saint, San Agustín.

Now it looks pretty. “It was just dirt,” commented Plácida Luna, who says she organized the community to work in conjunction with the government, and to provide the stones that were used for the walkways on the perimeter, and for the niche to San Agustín. They worked together with the San Marcos community to exchange stone—flagstone for river stone—and tepetate, and their plaza was inaugurated in August. “The work was arduous, but we are happy now that we have a recreational space,” said delegate Greta Grisel, who also noted that the amount invested in the project was 1.5 million pesos.

Osvaldo Arteaga, Director of Social Development, and the person responsible for overseeing these community projects, told Atención that they are carried out through the PAR program, “There are currently around 300 [projects]; about 150 are educational infrastructure (classrooms, sports grounds, bathrooms, rehabilitation centers), with parents providing the labor. There are also 150 streets, roads, and squares projects. They are public works; people request them and get involved in the organization, the project, and the labor. Thanks to the public we have been able to make [these projects] possible. They are works that dignify the residents’ quality of life and change their environment.”