“In Xanadu did Kublai Khan, a stately pleasure-dome decree…”

According to Samuel Taylor Coleridge, this 1816 poem, one of three from the unfinished “Kublai Khan,” was composed during an opium-induced dream after reading an account of that fabulous city. Shangdu (anglicized as Xanadu) became Kublai Khan’s summer capital in 1274. After the Yuan dynasty fell in 1368, the city lingered on but was probably abandoned by 1430. The area has been designated a UNESCO World Heritage Site.

Coleridge only saw Xanadu in his dream, but Venetian explorer, adventurer, and merchant Marco Polo (1254-1324) actually visited the city with his father and uncle, Niccolo and Mateo, during its heyday. By the time of their arrival, China’s capital was being shifted southeast to Daidu (Beijing). The multilingual Polo became indispensable to Kublai Khan as special envoy and later governor of a city. Kahn’s later reign was marked by a heavy reliance on non-Mongol military personnel and foreign advisers. He was driven by the unrealized dream of his grandfather, Genghis Khan, who desired to unite the whole of China under Mongol rule.

In his book “The Travels of Marco Polo,” the merchant and adventurer briefly mentions his introduction to a plant, possibly breadfruit, used by the Chinese to create a meal similar to barley flour. The meal was then converted into pasta-like dishes, including one described as lagan (lasagna). Although it is unlikely that Polo was solely responsible for the introduction of pasta to Italy, his voyage to China and resulting fame helped to spread and popularize the use of noodles.

Preheat the oven to 375 degrees F. In a shallow baking dish, combine 2 tablespoons of oil, butter, tomatoes, garlic, and thyme and place in the oven. Roast for 15 minutes. Remove from the oven and sprinkle with salt and pepper. Set aside. In a large pot of boiling salted water, cook pasta according to package directions until al dente. Add zucchini and cook for an additional 30 seconds. Drain pasta and zucchini and set aside. Coat salmon with olive oil and season with salt and pepper. Heat remaining 2 tablespoons oil in a large sauté pan over medium heat. Place fillets in pan skin side down and increase heat to high. Cook for 3 minutes. Turn salmon over, and cook for 5 minutes, or until browned. Salmon is done when it flakes easily with a fork. To assemble: Scoop pesto into a large mixing bowl. Top with pasta and zucchini blend. Toss together until ingredients are well coated. Divide pasta mixture between two serving bowls. Top with roasted tomatoes and a salmon fillet. Finish off each bowl with Parmesan and serve. 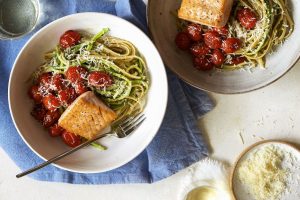