When a cat or dog is adopted from the SPA, we interview potential adopters and then introduce them to available animals. Before adopters leave the SPA with their new pet, we ask the adopters to let us know if there are any problems. A few days later, we always call to check with the new owner to make sure things are going well.

After having been at the SPA for four years since he was five weeks old, Aussie was adopted in early April by a woman who knew his history, was aware he was very timid and required patience for him to adapt, and agreed to give him a chance. We followed our standard protocol, but no matter what time we called, no one answered. Finally, we found a valid email address and wrote to her.

She responded that Aussie had escaped from her home 10 days earlier from an open terrace that she had let him explore. She had not seen him since. She did not look for him, no longer wanted him, and refused to help in the search.

Devastated, I ventured out, located the adopter’s street, and—though feeling that it was futile—nevertheless started searching. I happened to look up and saw a skinny black and white cat cross the street and disappear under a garage door. Peeking underneath, I just knew it was Aussie. An old man answered the door and, in Spanish, berated me and told me to leave. Frustrated, I enlisted the help of our bilingual office/clinic coordinator. Even though it was Sunday, she came quickly and determined the man was angry that the cat had trespassed. He didn’t like cats and would not let us in to retrieve Aussie because of the coronavirus.

The next day, after trying a variety of options, we came up with a plan. After scaling a stone wall, our men placed a trap in the nearby vacant lot. They saw Aussie as they were setting the trap, but he ran. We returned later in the day to find that our beloved, but angry, Aussie had taken the bait and was in the trap! Back at the SPA, he was examined and monitored. He had lost a considerable amount of weight. It was very touching when he joined his former roommates, greeted SPA volunteers, and resumed his daily routines. His cat friends welcomed him back by giving him head bumps and body rubs.

Aussie did not know how to survive on his own in the streets of San Miguel de Allende. If we had not finally been able to contact the adopter and learned that Aussie was missing, he probably would have died.

If you lose a pet, contact the SPA (415 152 6124 or info@spasanmiguel.org), post on the Pet SOS Facebook page and other sites to get the word out, put up posters, or do radio ads. Plus, check Ecologia daily (primarily for dogs). As a pet owner, you owe that to the cat or dog you have chosen to take into your family. 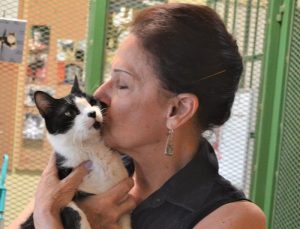