The Guadalupe neighborhood comprises 27 streets. It has a neighborhood president, and each sidewalk has a representative. Cate Poe is the liaison with the foreign community. Although the exact number of foreigners in Guadalupe is not clear, more and more want to live in this neighborhood. This is what Marbella Martínez, María Helena Rincón Llamas (the neighborhood president), and Cate Poe say. They give credit to the good works carried out in recent years in the community. People want to move here because of these works and because they find it safe, clean, and the neighbors know each other. The neighborhood organization has brought about many positive results, including a recycling program and currently 15 security cameras (apart from those from Public Security) that provide greater peace of mind in the residents’ daily lives.

The pandemic contingency created a lockdown situation, but for the Guadalupe neighborhood it strengthened the ties between the Mexican and expatriate neighbors. When people began to lose their jobs at the beginning of the pandemic, neighborhood residents immediately got to work and began to distribute food to those most in need. At one point, 177 food and daily necessity deliveries were made a week.

The Obraje arroyo divides the Aurora and Guadalupe neighborhoods. For over ten years the government has considered creating a green corridor where there were would be small artificial lakes, sculptures, trees, bridges, and even an amphitheater. But the reality is that the project is nowhere near what was projected a decade ago.

Currently, there is a walkway that runs from Calzada de la Aurora to Avenida Guadalupe. There are trees, two exclusively pedestrian bridges, and a ford. It is a clean corridor without garbage or excrement. Precisely at the entry to La Aurora neighbors have started to organize a Sunday market that runs from 10am-4pm.

Marbella Martínez has lived her entire life in Colonia Guadalupe. Her elders told her that the area was a walnut tree orchard until, “The Álvarezes sold the land and began to develop houses.” In some streets or yards, you can still see walnut trees.

The arroyo, however, has always been there. María Helena Rincón Llamas came to live in the neighborhood eight years ago, when she inherited a house from her father. She remembers the filth in the Obraje arroyo. “It was a rat’s nest, not four-legged, but two,” referring to the thieves that were prevalent. They brought security problems to the neighborhood.

She recalls that six years ago, as president of the neighborhood, she proposed cleaning the arroyo. It was then that the walkway was started, the murals on the side walls were renovated, and a metal structure was placed for collecting recycling material—glass, plastic, cardboard, and aluminum. The material is sold, and the income has been used to remove posters, and graffiti. The money raised has also paid for the 15 security cameras that monitor the neighborhood. “We, the 23 women and 3 men who represent the streets of the neighborhood, are in constant touch. We communicate, and we alert each other in case we see something strange or suspicious. For example, we know who always takes flowerpots or misplaced items. Look, we just received the photo of him,” said Rincón Llamas, as she displayed the photo received via WhatsApp. It’s an elderly man wearing a cap, and a red shirt. He was carrying what appeared to be a Rugrats cartoon doll. 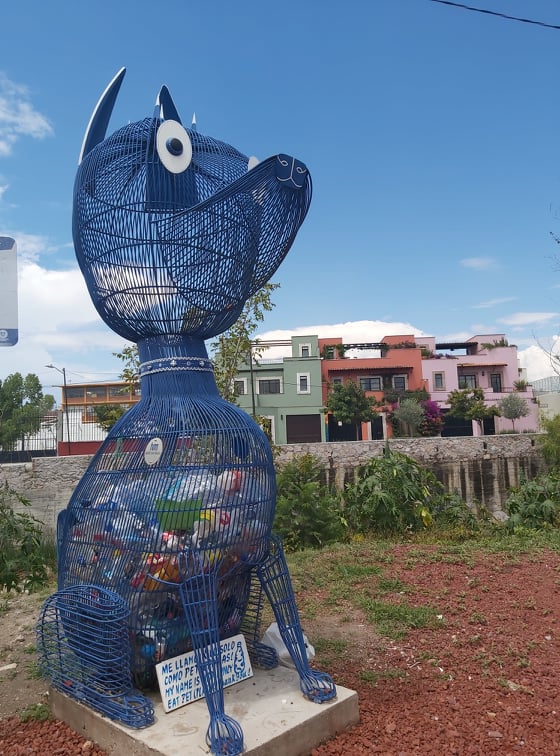 Cate Poe explained to Atencion that when the contingency started, information was disseminated through the chat group of street representatives that a family had been left without work and without means of earning a livelihood. One representative said, “I’ll donate 500, another came up with 1,000 pesos, others delivered daily needs goods.” Thus the community project began to grow. At the peak of the pandemic they were able to feed up to 177 families. “We had donors from the neighborhood, but we also used social networks to get donations. At one point we were operating with US$1,000-1,500 a week,” she said. The goods they delivered were bought in local stores and contained products ranging from vegetables, carbohydrates, and protein, to detergents and personal hygiene products.

Currently the community group continues to deliver supplies to 14 families. These beneficiaries are older adults with chronic diseases or people with sick relatives who cannot go to work because they need to care for their patients. “We have savings, and we will continue to provide as long as we can. Also, we don’t know how variants can impact us,” Poe said.

To support economic trade in the area, currently every 20 stalls are set up to create a street market Sunday along the walkway. You can find everything from crafts to food. “We have the endorsement of the administration. The sellers are not charged a single peso. What we are looking for now is for people to come and support them,” commented Marbella Martínez who has been actively working for the good of her neighborhood.

This neighborhood is known for the murals that have been created since 2012. To get to know these murals, the representatives of the neighborhood invite people to look at the FatBastard Facebook page to engage a guide. They are in the process of coming to an agreement so that a part of the donations that the guide receives will go not only to the muralists, but also toward maintenance of the same. Currently, various tours are available, but these are “the private business of a foreigner that does not benefit the neighborhood, nor does she live in the neighborhood.” Now, the neighborhood representatives are in contact with street artists so that the next murals theme is traditions of San Miguel de Allende. The works would include the Sanmiguelada and a graphic description of what La Nogalera (the walnut orchard) was like prior to the development of the Guadalupe neighborhood.