When the city “stopped” in March 2020, everyone hoped that it would be for two or three weeks, and then everyone would return to the street as if nothing had happened. Just as it has been all over the world, we have missed the joy of parties, festivals, concerts, processions, and talks. We have missed the fireworks that have become characteristic of the Valle del Maíz festival. Even the rain was absent in 2020, because those who know say that the day of the festival in the Valley “it is very rainy,” But on the last weekend of last year, it did not rain. Also last year the streets were not flooded with the garish colors of the marotas—men dressed as women who dance without face covering like a bunch of crazies. Neither were there the giant mojigangas, nor the anthropomorphic skulls of the dancers.

Incense was lacking in the air at dawn, and there were no xúchiles and not canes. The sound of praises, the music and of the Sierra Leones was also missing. Although this year the group will not be present either, they will send a recording that will be played during the small celebration that has already been prepared. Thus, little by little the most traditional festival of the city returns.

Beyond Good and Evil

Demons, virgins, Christ figures, and totems coexist in the workshop of Cruz Centeno. He is an original artist from El Valle del Maíz who for almost forty years has given the devil a face. It is a pleasure seeing the striped dances of El Valle; the dancers are crowned with “human” skulls and horse manes, they carry prototypes of spears, and pre-Columbian weapons. The striped dances often confront the French, and an element that is always present is the devil. That character circles the warriors together with death and in the end—always—it is one of the striped ones who is taken. This happens after he is “split” by the razor-sharp scythe of death.

In this particular neighborhood, one of the oldest in San Miguel, there are about six striped dances and each one has its own characters. Don Cruz Centeno told us that since childhood “one is involved in the culture” that identifies the neighborhood, if he is not a dancer, he is the devil, or death, or he participates in the colloquium and they get involved in weaving the súchil or other activities.

Centeno arrived at his art without planning or thinking about it. He worked as a bricklayer at 17, and fortuitously worked with the santero Francisco Almanza, who introduced him to art in his workshop and taught him art for 14 years. In that workshop, Centeno was a model for the carving of one of the Lord of the Column sculpture; which “is in Celaya in a market.” It was also in this workshop where he carved the first Christ that is now in Aguascalientes.

Then he became independent. Now, with his hands he turns wooden logs into Christ carvings, holy families, angels, virgins, and saints. But he also creates the elements that give identity to the Valley, the masks of death and of the devil.

“When I make a devil mask I only do what comes to my imagination, nobody knows what it is like. We know that the classic has an outside tongue, but I try with different ideas: one with a pig’s face and mouse ears… it depends on my state of mind,” he commented. His experience with masks—bunting carving—started 20 years ago, when his son told him that he wanted to be the devil in a dance. Since then he has dedicated himself to making the figures that are an essential part of the masks of the striped ones. Good and evil coexist in his workshop, but he is beyond that because he says “I see it as work, and nothing else, I am not superstitious.” To contact Don Cruz Centeno call 4151333599 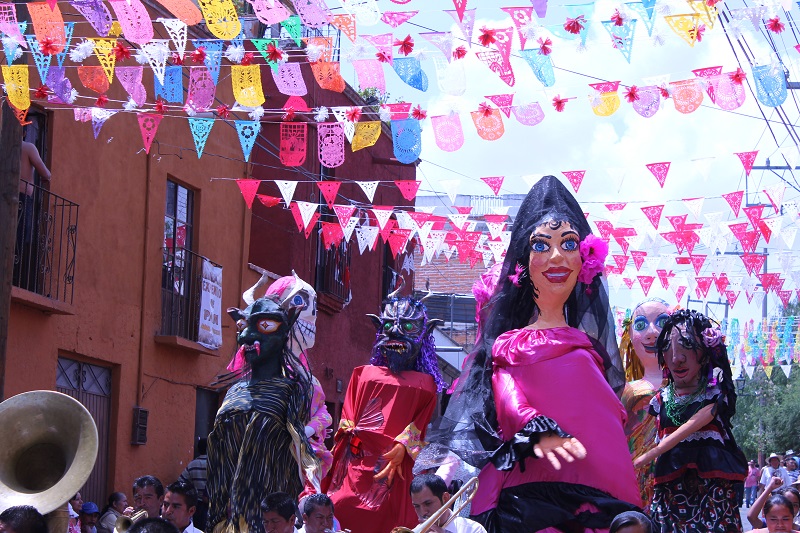 One of the mayordomos of the Valle festival is Agustín González. He is also recognized in the municipality as a “Guardian of Culture” because of his work in preserving traditions. He spoke with Atencion and told us that the festival will be small and will follow all the health protocols, “there will even be a health filter.”

He did clarify that it will be mostly for the locals, that is, for the residents of the Barrio del Maíz. Furthermore, the traditionalist Polo Estrada has previously said “we don’t dance for the people, for foreigners, we dance for the one above. Nothing more.”

“Everything that will be carried out is structured to protect the safety of the people, on behalf of the stewardship the atrium of the temple is circulated and when having to enter first, it will be necessary to go through a sanitary filter where the temperature will be checked. People will be disinfected, antibacterial gel will be applied, and the use of a mask will be required. The locals already agree with the rules, and whoever does not respect them will not be able to participate in the event,” said González.

The novena (which did not include masses on this occasion) begins on May 20, only with prayers for the Holy Cross. On that day the flowers that adorn the neighborhood church are also offered. On Thursday 27 the offering of wax (in the form of candles) is placed, and the temple is decorated with various ornaments.

On Friday, May 27, among shells, mayordomos, and devotees the vigil of the súchil (offerings made with cucharilla leaves) will be prepared and raised onto the facade of the temple. On the same night with prayers and the singing of praises, the alborada will be prepared. From 5am on Saturday the 28th the roar that characterizes the traditional festivals of San Miguel will be heard once again. That same day the súchil will be erected at 4pm, and at 8pm a vigil will begin—an ancestral rite, but it will now be for the Holy Cross. While praises are sung, and people pray (all night), canes and teaspoons will be woven. These will be carried the next day in small processions and placed on the calvaries near the Valley. The early morning of Sunday 30 will begin again at dawn with the singing of the traditional mañanitas to the Holy Cross. The festival will close at 9:30pm on Sunday.

Previous PostPerfect Day of Arturo Lopez, a member of the Culture and Traditions Management teamNext PostWeekly Horoscopes May 30