Dozens of houses—single-family, duplex, and even triplex, stand on 28 hectares in the upper part of the city at Jardines de Allende. It’s estimated that at the very least, the development will attract seven thousand residents. In the meantime, those who live in the Los Santos neighborhood at the back of the complex, have had to deal with a lot. For months, aside from the lockdown due to the pandemic, they’ve had to endure vibrations (some have caused cracks in their own homes); and the “mountains” of dust the wind carries, which causes allergic reactions. And now, as we enter high temperature season, they will have to endure more. If they are working from home, they will have to spend their days with the doors and windows closed, dealing with the noise, the dust, and sometimes even without water. This has led them to question not only the impacts that this is having on them, but also about the water supply for the new housing development, for themselves, as well as the damage to the environment.

Those who live in Los Santos remember when the area was a pasture, on which huizaches (sweet acacias) and mesquites were later grown. They were able to see birds of all kinds; even squirrels, and rabbits. Prior to the construction of Jardines, they noticed that some trees were being marked, and assumed that these would be ones to be rescued. However, none of these trees were transplanted. They voiced their complaints to the director of Environment and Sustainability, and he (unofficially) agreed that there was damage to the flora and fauna. But when Atencion requested to meet with him, he sent a message through the Social Communication Department: “There are no complaints. Only one, and this is SAPASMA.”

Other neighbors called Urban Development, Civil Protection, Public Works, where they were told that the complaints had to be submitted in writing. “Addressed to the mayor, with a copy for each of the agencies involved.” Others decided to call the company directly to demand an inspection of the damage—dust, noise, vibrations, and even structural damage. Indeed, the construction manager sent someone to take pictures “they told us they would come tomorrow, and do you know when they came back? Never,” mentioned one of those affected.

Atencion visited several of the houses, where the “mountains of earth” outside and inside the buildings are visibly evident. In others, there were cracks in rooms and hallways. “These were not there. They were caused by the construction, ”said others. They even showed videos about how they lift the earth “by kilos,” and nobody pays any attention to them.

With so many complaints, they went to the president of the neighborhood association. Atencion spoke to him and he acknowledged that he is not a fan of bureaucracy, but admitted that this is the right thing to do. He first made several calls, and then presented the formal requests focusing on watering the area several times a day to avoid dust. In reality, he did not remember what was requested, and did not have the document delivered at that time. 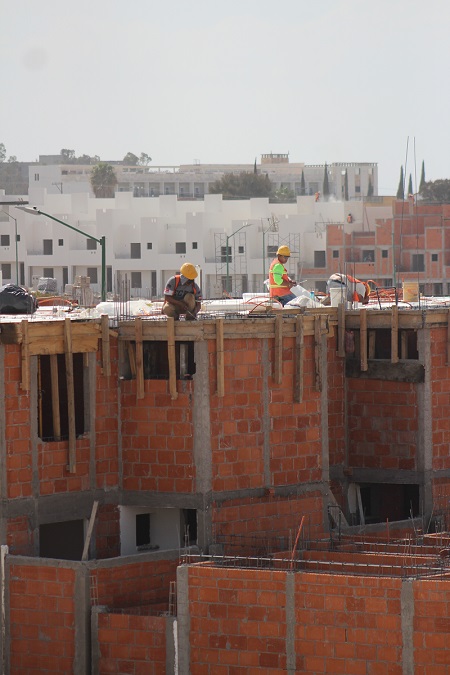 They will not have water from the Aquifer

We interviewed Francisco Jiménez, director of the SAPASMA (San Miguel de Allende Potable Water and Sewerage System). He first indicated that the water supplied to the neighborhoods in the upper part—Jardines, Insurgentes, and Los Santos—comes from the Insurgentes II well, and the San Miguel Tres Cruces tank whose water comes from La Lejona. He remarked that if neighbors in that part of the city do not have water at times, it is not due to a shortage but to the poor quality of the hydraulic network that the developers put in. What happens is that when a leak in a pipe is repaired, another one appears.

In addition, he reiterated that people should not expect water to function like electricity, where “a fuse is fixed and that’s it, everyone has lights again. But that’s not the issue with water.” He also added that water in pipes will always go to the lowest part first; then from there it rises until it reaches where it should go. When there are leaks again and again, water will go down. That’s what causes the inconsistencies.

Jiménez explained that the water for Jardines de Allende (marketed by Grupo Guiar), will come from the San Julián II well which they drilled themselves. He indicated that the company has made contributions not only for the aquifer, but also for the new Water Treatment Plant, and for infrastructure (although he did not specify). Finally, he said that the city continues to grow, and its hydraulic and drainage infrastructure must change and adapt. People should not oppose it because, when their houses were built, nobody opposed the infrastructure—”now they do.” In San Miguel de Allende, he concluded, there are three natural slopes: Cuesta de San José, Valle del Maiz, and Cinco de Mayo. The ideal would be for the Allende neighborhood to lessen the slopes. Finally, Gonzalo González stated that the development of the aquifer will not have water; and he referred the well as San Julián III.