In the cantina on the corner of the main plaza, Jardín Juárez—one of the few establishments open during the pandemic—Mónico, a resident, recounts that the town has experienced waves of abandonment. The first was around 1900, when the mines breached the aquifer and flooded, leaving the inhabitants who became unemployed and with no other resources, to abandon their land. The second wave was between 1920 and 1930, with the Revolution and the Cristero War. Pozos was abandoned and even the temple of the Lord of Work was left unfinished. Mónico gifted us with a picture of the sculpture of Christ, so that we may always have work. He recalled that the resettlement of Pozos started in 2000.

Visiting Pozos during the contingency, from Monday through Thursday, can be interesting—and not. Photographers will love the cobblestone streets, the vestiges of abandoned houses, the landscapes, the peacefulness as inhabitants stroll at night under the dim lights. Those looking for gastronomy will surely find something, but only by roaming the five blocks of the town center. “Due to the pandemic, everything is only open from Friday to Sunday,” they say at La Fama café.

You can always find lodging and food at Posada las Minas. The hotel’s spacious garden with its large range of succulents and Cactus Room are delightful, and for your eating pleasure the menu ranges from mixed stuffed chiles to enmoladas to burgers.

Keep in mind that the town has no taxis, and most who work in tourism services come to Pozos from San Luis de la Paz. When touring the mines with a guide, sometimes you need to provide your own transportation. However, you can walk through the old mines. Nant’ab offers tours in English to the mines by van or cuatrimoto. Contact Arturo at 468 113 3565 or Octavio at 468 103 0650.

Also, Don Rogelio is on the road to El Triángulo, beyond the prehispanic musical instrument shop. He will take you on a guided tour of his “personal mine,” and will explain the origin of each of the stones he sells. If he takes to you, he might give you a ride to the ruins of El Triangulo mine.

Go to Pozos anytime, but be aware that not all places are open during weekdays. 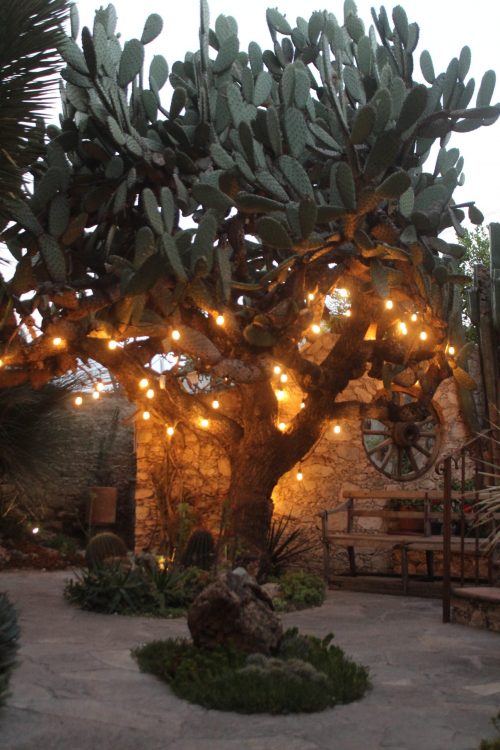