The Guadalupe-Reyes season is underway. It is not a surname, but a period of 40 consecutive days of celebrations that stretch from the commemoration of the Virgin of Guadalupe on Dec. 12 to Three Kings Day on Jan. 6. This year, however, the season will not be celebrated in a normal way, due to the COVID-19 pandemic which this month marks its one year anniversary of having started in China.

In the municipality of San Miguel de Allende, the government and the diocese of Celaya, which includes San Miguel, have taken a stand against any religious or secular celebration. The directive is to cancel all public and private gatherings, meetings, and religious festivals in the last weeks of the year, although the announcement of the first COVID vaccination program in Mexico will tempt more than one to disregard the request. The vaccines are due to be distributed from mid-December through next June, but the majority of the general population will not have access to the vaccine until 2022, according to the federal Department of Health’s calendar.

Atención asked the Guanajuato Department of Health about its plan for distributing the COVID-19 vaccine throughout the state and to its foreign population. The answer was that it is too early to know, since the federal announcement was just made and the issue “goes on for a long time.” 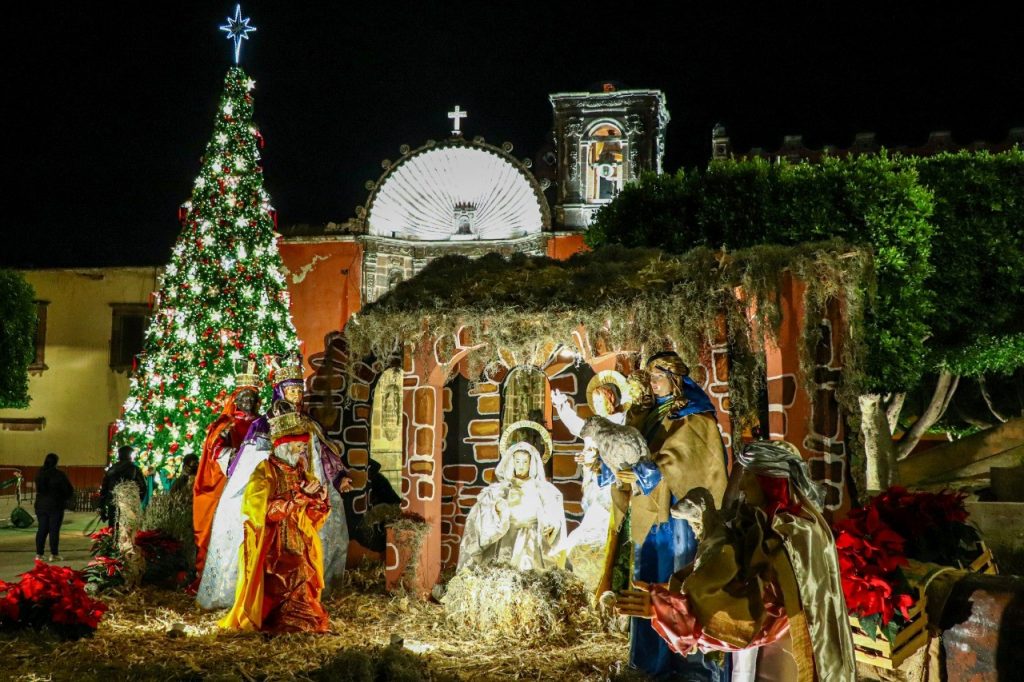 The Diocese of Celaya, under whose umbrella San Miguel falls, has called on Catholics not to hold posadas (ritual pre-Christmas processions and gatherings) or parties where many people gather. The diocese invites people to celebrate the posadas or other local traditional Catholic ceremonies, but only with people living in the same house, as indicated in a statement published on Dec. 5.

The appeal was made because the second wave of COVID-19 infections, before the arrival of winter, has already left 75 dead and 1369 cases of contagion in the city. The case of a family Govea known by San Miguel residents has had local impact because in just one week three members—the mother and two children—died from the virus, and a third child struggled to recover. This tragedy was replicated in another family from Colonia Guadalupe.

The government has therefore called for inhabitants to stay home if it is not necessary to go out and to follow health protocols: safe social distancing, frequent hand washing, and the mandatory use of facemasks. There was an additional request that surprised locals: to avoid private gatherings where, according to Mayor Luis Alberto Villarreal, sanitary measures are often relaxed, causing contagion. At the city council session on Dec. 7, council members approved the suspension of posadas, religious festivals, and private gatherings.

The message is negative for small gatherings, but positive for restaurants to continue open and events such as weddings to be held, as part of the mayor’s effort to maintain the local economy. The director of Civil Protection reassures that San Miguel restaurants and bars have been following the sanitary measures.

In that same city council session it was agreed that those who do not respect the measures will be punished according to the General Health Law (article 427), with arrests lasting up to 36 hours. On the other hand, members of the council questioned how many people can be kept in the municipal jail if the sanitary protocols are not fulfilled. Additionally, council members who voted against the measure emphasized that the law should be applied to everyone equally, without special privileges as occurred at the charlotada (comic bullfight) organized in the lower part of Los Frailes on Nov. 21—without authorization—by owners of a restaurant bar. Villarreal stated that he was unaware of the event, and remarked that no relevant complaint was made. On the other hand, he applauded the fact that 911 calls to report clandestine parties have fallen by 500 percent since Nov. 27, when convenience stores, shopping centers, and liquor stores were forbidden to sell alcohol from 5 p.m. on Friday until 12 p.m. on Monday until further notice.

In an interview, Villarreal explained that this course of action is being taken to stop the wave of contagion without confining San Miguel residents again, and to keep the economy on course. He also said that in subsequent city hall sessions the protocols for Christmas Eve and New Year’s Eve events would be defined. 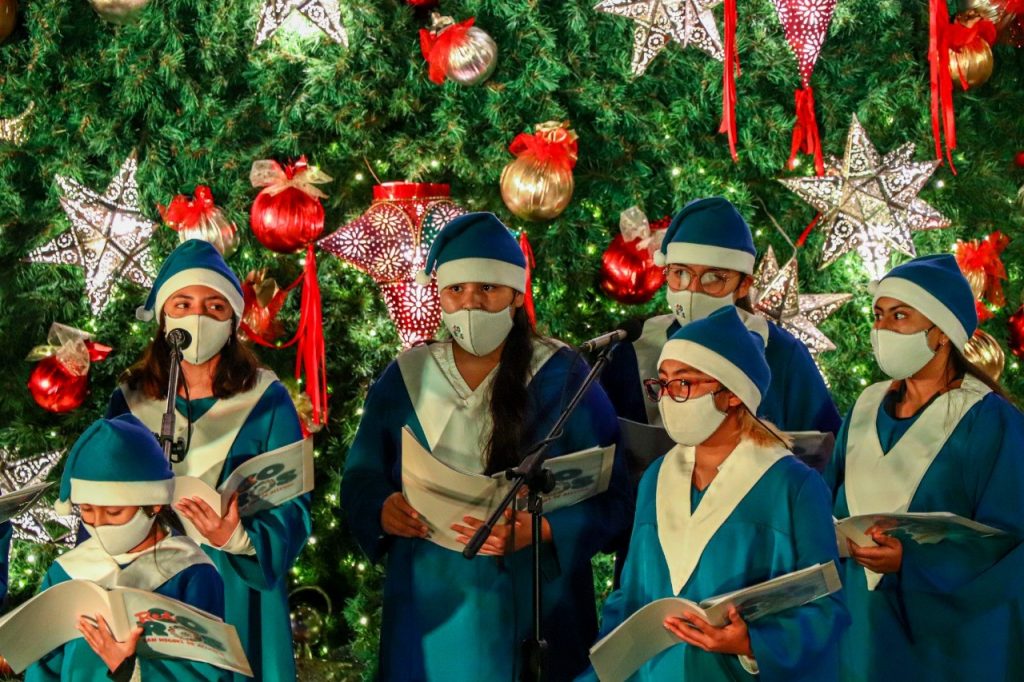 Tree in the square and the virtual world

Director of Culture and Traditions Paulina Cadena had already announced that all public events will be virtual: recorded and then broadcast, or broadcast live with reduced audiences via social networks. That is how this year’s tree lighting was done.

The Department of Economic Development worked together with five artisans to decorate the 15-meter-high tree with 300 ornaments, ranging from star lamps and brass angels, to piñatas and poinsettia flowers, and illuminated by 49,000 lights, according to its director, Francisco Garay, and its head of Artisan Development, Sandy Galván. The tree was lit on Dec. 7 in Plaza Cívica with no audience except for a dozen children from the Casa de la Cultura children’s choir. They counted to three and the tree was lit, then they sang a couple of Christmas carols, after which everyone went home without ponche, atole, tamales, sweets, or piñatas. The Christmas tree in the San Antonio church atrium was lit up the same evening, and thousands of tiny lights were lit in the streets of the Historic Center.

A bit of history

Public posadas began with the advent of the 20th century as a representation of the pilgrimage of Joseph and Mary to reach Bethlehem, concluding with the birth of Jesus. By 1950 this voyage was already represented in San Miguel in a very unusual manner: a dilapidated vehicle (the garbage truck) carried the pilgrims, someone played a piano, and carols could be heard in the streets as the singers walked with dozens of shepherds, going from one church to another: nine days, nine posadas, nine churches.

That tradition, now far evolved from riding in old vehicles, will be very different this December. The pilgrims will only ask for and receive posada (shelter) in the churches of La Salud, Las Monjas, San Juan de Dios, La Parroquia, San Antonio, San Francisco, El Oratorio, Santa Ana, and La Aurora, and the procession will be broadcast via the municipal government’s social networks.

The program that the Department of Culture has prepared not only includes posadas but also pastorelas (nativity scene reenactments), folk dances, concerts, and other events. You can check the program in Qué Pasa Festivals and Events.

The nativity scene in Plaza Cívica was installed by artist Hermes Arroyo. He told Atención that it consists of 14 pieces—José, María, baby Jesus, the magi, shepherds, and animals—in half-size sculptures of paper mixed with cardboard About his experience working on the nativity scene during COVID the artist said, “One becomes part of the traditions. I relate to popular art; the life of San Miguel is beautiful. I learned a lot from the local cartonero (cardboard artisan) Genaro Almanza. He taught me about San Miguel de Allende. Foreigners come to see us doing this, which we like; it is part of our history, our life. I retained his style in great measure, his recipe for life. I went on his path.” The artist added that there will be a circuit so that people can pass by and see this dramatic representation of the pilgrimage. Meanwhile, Arroyo believes people must take care of themselves, protect themselves and not have parties. “We have already lost a whole family of dear Sanmiguelenses; it saddens us, but this should teach us to take care of ourselves and teach our children [a warning] not to wander about if it is not necessary.”