The Hellenic period followed the death of Alexander the Great in 323 B.C., enduring until the emergence of the Roman Empire after the Battle of Actium in 31 B.C. and the conquest of Ptolemaic Egypt the following year. A diverse cultural phenomenon, its identity was shaped by a continuum of interaction between traditional regional elements and hybrid societies, spawned by Greek and non-Greek conquerors and immigrants.

Many factors determined how this synthesis would take place, dependent on the various ethnic groups, their economies, societal organization, and political clout. Each major Hellenistic city engendered its own distinctive cultural fingerprint. Urban centers where Greco-Macedonian populations were dominant were islands unto themselves, exhibiting strong personalities and differing methodologies that contrasted markedly with the equally varied cities of inland regions such as Babylon and Thrace.

The political mood of the times was volatile, marked by ongoing military conflicts between city-states, as well as convulsive migrations of peoples within and without their borders. More strikingly than the preceding classical Greek culture (fifth to fourth centuries B.C.), Hellenistic infrastructure exposed the differences between the mercurial, cosmopolitan vigor of the upper social stratum and tradition-bound life for the urban and rural poor.

With its renowned library, the glittering icon of Alexandria became a hotbed of artistic activity, inextricably linked to the Alexandrine grammarians—philologists and textual scholars devoted to an intensive study of the literature of the past. Their critical revisions of the works of classical Greek literature, particularly those of Homer, were deeply influential and marked the beginnings of Western grammatical style.

Macedonian-born Egyptian Pharaoh Ptolemy II Philadelphus (308–246 B.C.) played a leading role as a generous patron of the arts, expanding the library and financing a research center for philosophy, literature, mathematics, and natural sciences. During his Golden Age, the library acquired a vast number of papyrus scrolls, estimated to comprise up to 400,000 volumes at the height of its influence.

First cultivated in Egypt, then in Greece, figs became an ever-popular ingredient for ancient cooks. Here they add robust texture and natural sweetness to a Greek variation of roasted potatoes.

Roasted Potatoes with Figs and Thyme

Salt and black pepper to taste

Place figs in a bowl, cover with hot black tea and let cool. Cover and refrigerate for 4 to 6 hours or overnight. Preheat oven to 400 degrees Fahrenheit. Scrub potatoes well. Separate garlic head into individual cloves but do not remove outer skins. Drain figs. In a bowl, combine garlic, thyme, figs, potatoes, and olive oil; toss. Place in a roasting pan and bake until potatoes are tender enough to pierce with a fork, about 45 minutes. Remove and season immediately with salt and pepper. Serve. Diners may remove skin from garlic at the table and eat along with the potatoes, if desired. 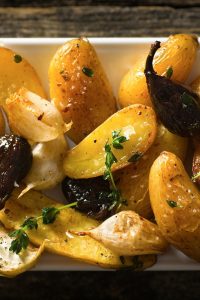