Sichuan (Szechuan) is a landlocked province of approximately 81 million inhabitants in southwest China. The region occupies most of the Sichuan Basin and the easternmost part of the Tibetan Plateau. Its population speaks an unusual form of Mandarin, originating as a variation during the province’s repopulation under the Ming Dynasty. The climate is warm and humid, a source of pungent dishes advocated by Chinese physicians. Intense flavors came from liberal use of ingredients such as rice wine vinegar, fermented soy beans, hot pickled mustard tubers, black bean sauce, and salts from artesian wells.

Chili peppers and fragrant Sichuan peppercorns produce a numbing effect. Sweet comes from different types of sugars such as beet root or cane. Sour is achieved through the use of vinegars and pickled vegetables. Bitter melon adds an astringent touch, and salt is derived from unique flavored salts produced in the region.

Sichuan beef consists of flank or skirt steak cut into thin strips and marinated before being stir-fried alongside other ingredients. Chicken or pork may be substituted, if preferred.

Cut the meat lengthwise into 3 strips. Cut strips crosswise into 1/8 inch thick slices. In a bowl, stir together cornstarch, soy sauce, sugar, and rice wine. Add the steak and toss to coat. Let marinate 30 minutes, or cover and refrigerate a minimum of one hour. Combine soy sauce, rice wine, chili sauce, sesame oil, ginger, and garlic in another bowl. Set aside. Heat a large un-coated skillet or wok over medium-high heat. Add 1 tablespoon oil, and heat until shimmering. Scatter in the steak, stirring and flipping until meat is no longer pink. Remove to a plate. Heat the second tablespoon of oil in the same skillet. Add the dried chile peppers. Press and flip them in the oil until they darken. Add the carrots and bell pepper, and flip vigorously a few times. Add the beef slices, tossing with the vegetables for about 30 seconds. Pour in the sauce, giving a few sweeping turns until thickened. Tip into a hot serving dish. Garnish with green onions and sesame seeds. 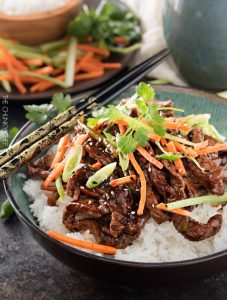