In 2019, Sol Araiza and Baby Palma received permission to get married, and chose June 26, 2020 as the date. However, everything has come to a halt due to the Covid contingency. They are a “homoparental” family—they have two children. Getting married means protection for them as a couple and the children in case Sol or Baby dies.

When Sol was 13 and in high school, she fell in love with a girl. She asked her Mom what she would say if one of her children were gay. The response was harsh, precise, and based on religion: “You’re crazy, that’s from the devil. What would people say?”

Sol moved on and had male partners. She has a 14-year-old daughter and a 12-year-old son. She did not face reality until she was 31 years old and met Baby.

“Since I met my partner my life has changed. I have rheumatoid arthritis. My pain and depression were chronic. I would spend up to 15 days at a time in the hospital. The only time I have been in the hospital in two years was after my father died. Today I am a happy woman. My smile is not fake, I feel full, happy with who I am and who I am with. I have been asked: If you could turn time back, what would you change? I would change accepting myself from age 13, when I realized my orientation,” Sol told us.

Regarding her relationship with Baby, she said that at first Baby was a friend to her children. They met her, they went to the movies, to swim, and for walks, until one day Sol announced that “she will live with me, with us.” The children understand now, they know they have two Moms, and are not inhibited, even with their friends. “My son loves her. On Mother’s Day, they gave us both a gift.”

After a year-long relationship, Sol and Baby decided that they should get married. They knew from the start that when they went to the Civil Registry they would be denied a license.

“Rafa Cabrera invited us to a meeting with a group from León. They helped us with a document requesting the license. The judge denied it. So we went to the Judiciary, sued the Registry for denying us the license, and then we got an injunction. It was easy. I have now helped several people, and the only expense was when we took on the lawsuit. It is not an expensive process. We paid for the license in the Registry, like any couple who wants to get married. “We know of several cases of homosexual couples who spent a lifetime together, but when one of them dies the family always says they were friends. If there is a will, the family always is protected, because the other person does not have a legal standing. We share the house together, everything together,” and that’s why they want to get married.

We asked them how society treats them for being gay. “There are people who don’t encourage us, but they accept it. They see us as a single-parent family. We personally do not hide it. We don’t display much affection [in public]. We do hold hands. It is a life just like that of any couple,” Sol said.

She emphasized that the Civil Code for the State of Guanajuato should change to avoid the amparo (judiciary protection)  process. Although the Civil Code no longer defines marriage as the union between man and woman, nor are they mentioned, protection should still be required. Chapter 7, Article 101 establishes, “People who intend to marry will fill out an application that will be provided by the Civil Registry Officer …” In spite of this, homosexuals must be prepared to be refused. 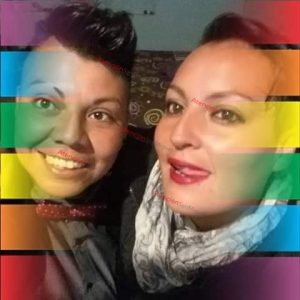 A Garden for San Miguel?