The dream of 27-year-old Nicolas (Nico) Bustamante finally came true with El Encanto restaurant at Recreo 84. It’s a space with a courtyard filled with plants and colorful flowers. The Mexican decor features walls with floral motifs and Frida paintings, but the menu is international. The featured dishes range from pizzas to enmoladas—the star dish according to customers. Although the presentation is classic, the unique flavors are what make them special.

There is a lovely bar (including a designated smoking area), where you can enjoy a variety of mezcal cocktails—from chili powder to fruits. “They bring the mezcal to me from San Luis Potosí and Guadalajara, it is a virgin mezcal. We prepare the rest,” says Nico.

He studied gastronomy at the university, but due to circumstances did not complete the course. However, Nico’s love of cooking inspired him to work toward his dream of someday having his own restaurant. “I worked in various kitchens. One day I discussed my idea with Francine Lori Llano. She supported me with completing the paperwork, and we hunted for a site. We found this building, and it was perfect,” said Nico.

Everything started from scratch. Little by little Nico bought the chairs, tables, and kitchen utensils. He wanted to reproduce a homey atmosphere in the restaurant for the enjoyment of both locals and visitors, and the restaurant evolved. It opened in October and the response was great until the pandemic. At that time, they were allowed to defer payment of the rent, and the success of the first two months helped pay the bills.

Nico’s dream has not come easy. When he told his friends and acquaintances in the gay community the comments were discouraging. They told him he would not make it. In fact, they have not visited the restaurant since it opened. “The gay community attacks each other. They should be more supportive,” he remarks.

His love of cooking came as a result of discrimination within his own family. There were insults from his brothers, cousins, and uncles. But someone who always supported him was his Mom. Nico cooked with her. “I never told her about my sexual preference. But she always knew. Before she passed away she asked my Dad and my brothers to protect me, because she knew. Now I have told them, and they accept me, because my Mom wanted it that way. They know that it is their duty now. They also accept my partner,” Nico said. For the past nine years, his partner has been César. He is in charge of all the decoration and painting.

Nico claims that he has not suffered rejection by San Miguel society. “I think I live in a different time. Older [gay] people experienced discrimination, but now everyone sees it as more natural.”

His final recommendation to young entrepreneurs like him is “to follow your dreams. Work in San Miguel; there is no need to move away. Work with a lot of love, with passion. San Miguel has a lot to give us if we work for it. Here, dreams are possible,” he concluded. 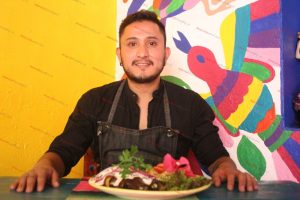 El Encanto International food. Recreo 84 Open from Tuesday to Sunday from 12-9:30 p.m., for late breakfast, lunch, and dinner. After the contingency, the hours will change.

A Garden for San Miguel?