Agave Sotheby’s International Realty today announced that they will be hosting works by the revered artist, Leonard Brooks. With the inauguration of their new flagship offices located at Sollano 19, Centro San Miguel de Allende, the luxury real estate brokerage will be hosting noted local artists throughout the year.

Mr. Leonard Brooks was a founding father of the San Miguel de Allende art scene and a cultural icon. Mr. Brooks, British born, and immigrated to Canada at the age of four, came to San Miguel in 1947 and was closely associated with other members of the San Miguel avant-garde art community, including Stirling Dickinson. Mr. Brooks lived a full life here in San Miguel, reaching 100 years of age. He left a prolific body of work, continuing to paint and create every day until his death.

As an official Canadian naval war artist in World War II, Mr. Brooks was highly praised for his work. He is recognized worldwide as an accomplished artist and his body of work in areas of water colors, oil painting and collage as well as starting the music movement in San Miguel with his classes at the Bellas Artes where he donated almost 40 years of his time and his salary to purchase and donate musical instruments. 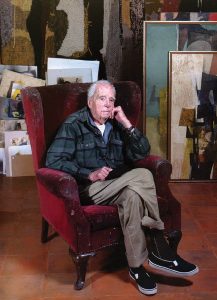 Advice from Tia Maria Sue: Dealing With A Cat

Historically, the arm of the Mexican government’s Immigration Services (INM) has always provided relief for any foreign national not able to leave the country due to emergency situations such as health reasons. This is done via an extension of time to remain in-country through the “humanitarian visa.” This was determined on a case-by-case basis, and time frames for the extension were determined the same way.

Border Challenges for Biden and the Future