As we go to press we don’t know how this story will end, but here is what we have been told by someone who has experienced living with Covid-19.

Our source, who showed us prescriptions, WhatsApp messages, calls, and other evidence for his story, told us: “When I saw that the virus was getting more widespread I told my parents that they should take precautions. Many people question the existence, or truth, of the virus. I told them that we could doubt it, or not, but [should] take the necessary precautions. In fact, going to my office, I avoided public transportation, and asked to go with them every day, because they drive to Centro every day, for various reasons.

“On May 22 they came to pick me up—I live alone—and my mom had a cough. Although she was wearing her mask, I made it clear that due to her condition (age, diabetes, and cough) she should stay home. I don’t know if she did, and perhaps she will never tell me. I didn’t see them for a week. What I do remember is that [when] I saw them on May 29 at their house; seven days had passed.

One of my sisters (who had a cough), my mother, and I were in the living room. I was sitting on a sofa, when my mother said: ‘I have a pain in my back, I feel cold chills, give me a blanket.’ I needed to leave, because the next day we had various activities at her house. I got home, I had one or two [shots of] gin. My surprise came next morning. My back pain was intense—my skin looked like plaster, it appeared to break if I tried to move. I had a fever, a cough, and constant weariness. I wasn’t hungry, but I knew I should eat, even though food were tasteless. When the pandemic started, I had bought paracetamol, and Tabcín (relieves cold symptoms). I called my doctor and explained the symptoms. He was tough with me— ‘Don’t go out, you may have Covid.’ I was better after four days. My sister then told me—she was still having symptoms—that she was ill at the same time as me.”

Our source continued, “I didn’t go to my parents’ house for a week. I didn’t want to bring the virus to them—whatever it was. Maybe it was fate, but on June 5 I ran into the same sister while I was walking to the office. I asked how my mother was doing. She told me ‘It’s bad, she can’t speak, she has a chronic cough, fever, chest pain, back pain, she’s weak, she doesn’t want to go to a doctor.’ I called the pulmonologist, and made an appointment for that afternoon. I insisted my Mom go. She had been self-medicating all week. Mullein and chamomile tea, penicillin injections, mists, a massage with hot ointment, etc.”

“I saw her the next day. I arrived at her house at 3 p.m. She was in bed with a chronic cough. She did not open her eyes, could not get up without help, had a fever, and had not eaten in three days. I was able to convince her to go to the Health Center, but when we arrived, at 7:03 pm on Saturday, the doctor had already left. We decided to go to the General Hospital.”

“We were sent to the wrong area, I sat my Mom on a bench, came back with a wheelchair, and took her to the doctor who would check her for respiratory illnesses. ‘Do not enter this office, it is for your own good!’ the doctor told me. I smiled a little (no one noticed because I had my mask on), and picked up my Mom to carry her into the doctor’s office. Her face (and cough) were right in my face, but the doctor did not see, or did not want to see that.”

“When the doctor realized that my mother couldn’t even say her name, she let me in. I could not answer routine questions. The doctor asked me to step outside her office. ‘We will take a sample from your mother, and I will ask her to be admitted to the hospital at least until we know the result,’ she said. The decision was not mine to make. I asked my Mom if she wanted to stay. She assented. Inside the office I began to ask questions about how and when we would see my mother and when we would have information about her health. ‘You will not be able to see her,’ the doctor said, and continued, ‘all communication will be by phone.’ The doctor could not say who would call us or at what time. Then he told me at for at least 72 hours my mother would be here. If she tested positive we would take her (with the consent of relatives) to Celaya, León, Salamanca, or Irapuato, but we would be unable to see her until she recovers. ‘But let’s not get ahead of ourselves,’ she clarified.”

“While she took the samples (she inserted a swab up her nose and another in her mouth, and took blood samples) I made calls. My sisters left the responsibility of the decisions to me. ‘Whatever you decide,’ they said. I must say, I cried a little. Then my Mom made the decision. She said, ‘Sign the voluntary discharge and let’s go.’ I could not deny her the right to her bed, to her family. I took her home. The doctor from the General Hospital added Salbutamol to the pulmonologist’s prescription. She said the test results would be ready in 72 hours.”

Our interviewee continued with his story.

“We are middle class. I know people here and there. A friend contacted Dr. Jiménez and asked him to review our case. I wrote him every day, or he wrote to me. We changed medications—added some, removed some, added, reduced, increased. If my mom is alive today, it is thanks to him. Without knowing the test results, he was there for us.”

“On day four, he wrote to me, ‘How is your mother doing?’ I explained that we did not have the results yet. He assured me that the epidemiologist would report them that day. ‘Cases continue to increase,’ he said, ‘and they have been busy.’ Later I called to remind him, and he assured me the epidemiologist would reply. A few minutes later someone called (I do not remember the woman’s name, nor can I verify that she was an epidemiologist) and hesitantly gave me the result: positive. When I asked for answers to my questions she ignored them and asked that I call the 800 number on the Coronavirus website.”

“The person who called made it clear that she would call me every day, or every third day to follow up on the progress of our case. She also remarked that family members who had direct contact with my mother could have access to a test, but … only if we showed severe symptoms. She never explained, nor did I ask what those symptoms were. As it happens, I already know them, as I have taken courses from the Mexican Institute of Social Security, and the World Health Organization, to prevent Covid-19.”

“Dr. Jiménez called me later, and explained the situation, as well as the possible progression of her illness. [He said] I shouldn’t celebrate, but he assured me that we could have access to the Covid test, that if we showed complications it would not be denied. I was calmer. Because he knows the case, he knows the health system.”

“During the whole process I had the medical support of Dr Jimenez. Due to my job I know professionals here and there. But I wondered what happens to the poor, those who do not have access to a WhatsApp number from a health professional, to a private doctor, to an email, to a call? If they leave the medical consult and care for their patient at home, without adequate access to health care, they will surely die.”

“The system is not a success, because four days pass before you know the test result; because they do not readily give you access to the tests, even if you had direct contact with a positive case; they don’t even give you a brochure on how to care for your patient and take care of yourself. They say they will call you to follow up, but they don’t. The system is a failure because people continue to lead their normal lives, unaware that they may be asymptomatic. They do not follow up, do not give you the correct recommendations, they assume that you already know, they are overwhelmed, they do not want to do the tests for many reasons.”

“No one wants not to stay in bed for one, two, three, four days, unless you’re on vacation. No one wants to care for a Covid-19 patient from 10pm to 7am. They complain, they cannot breathe, they cough all the time, they burn up with fever, they sweat, they do not move. You don’t know if they might die at any given moment.”

“The worst thing is that you want to do everything for them, but cannot do anything medical; maybe fix the pillow, the blanket or sheet, offer water, give the medication … You would like to enter the sick person’s body, strike the coronavirus to extinguish it. You talk about the case to your friends, but you ask for secrecy, because you know that society is cruel.”

“If you do not believe in God, you come to believe in some entity; you isolate yourself, you reflect, you cry silently, you pray, you ask for your family member to recover. With a little luck, maybe your family member will begin to eat a little. The fever and pain will begin to decrease. Your family member will open their eyes a little more each day. They will see you, they will cry, they will ask to die, but you know that your job is to keep them alive. With a little luck the pain will start to go away; they will talk to you. They will tell you of their nightmares when they saw the dead, or death; then they will eat, they will get up, they will smile a little; and then, maybe, just maybe, after six nights without sleep, you can sleep in your own bed. “

Our interviewee concluded, “I do not know when, or how, or at what time they will call me. I know that they should do a final test on my Mom when the symptoms disappear, to know that the virus is finished, but nobody has called.” 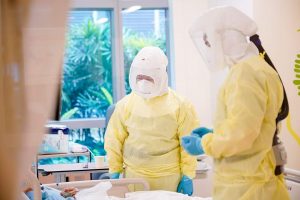 Jesús Aguado is from San Miguel. He studied Communication and has a Master in Education. With 18 years in the media he has dynamically gone from radio to print publications, and has also worked in government. He has been the main reporter for Attention San Miguel since 2011 and the Chief of Information since 2015. He is also a teacher.

Three of the most popular all-inclusive resort brands

For one upfront rate, you’ll get accommodations, meals, snacks, beverages, and most activities, including non-motorized water sports like snorkeling and kayaking.

Atención welcomes Angel Marin Díaz to the weekly Legal column. Mr. Díaz has 20 years’ experience as President and CEO of Inmtec Legal Services. Inmtec offices in Mexico include San Miguel de Allende and Mexico City, with offices currently under construction in Querétaro.
Welcome to the biweekly “Q&A with Angel.” I will answer your questions every other week with pleasure; they do not necessarily have to be on the previous week’s topic.

Lecture: Ending the Pandemic Slump: Is MMT the Answer